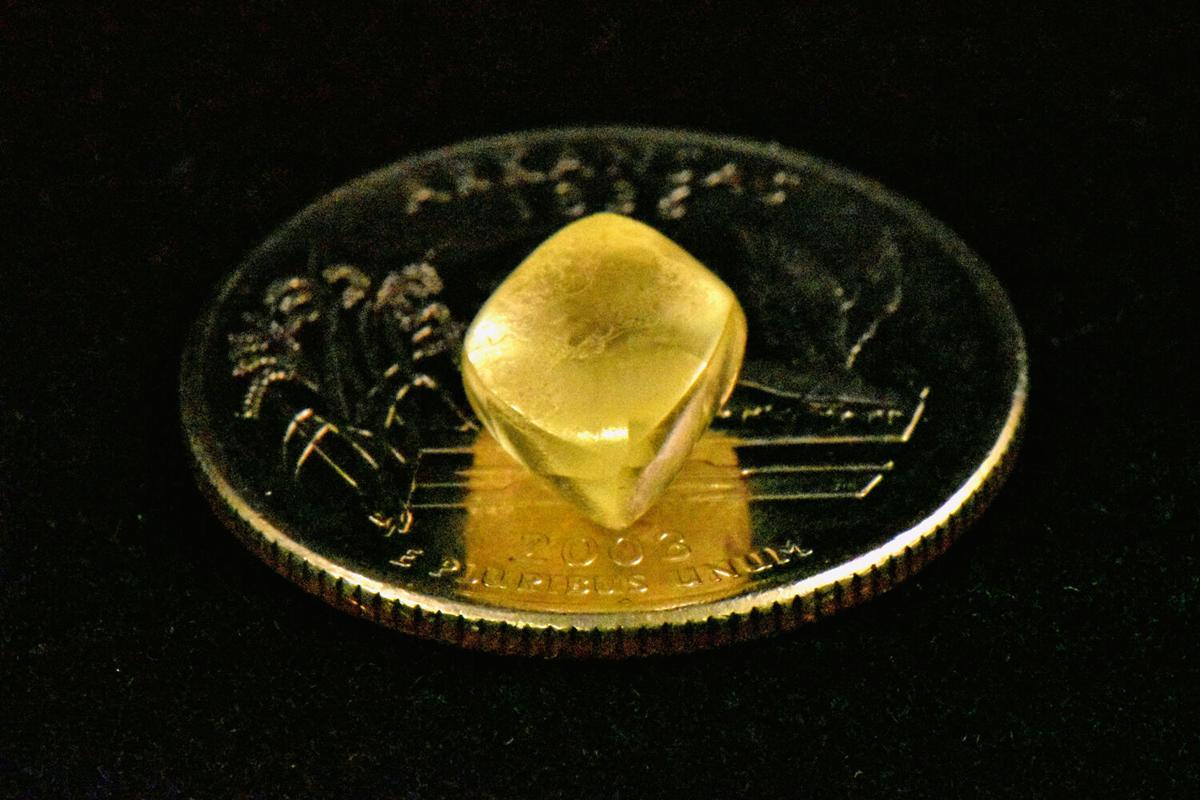 The Lucy Diamond found by Noreen Wredberg at Crater of Diamonds State Park. 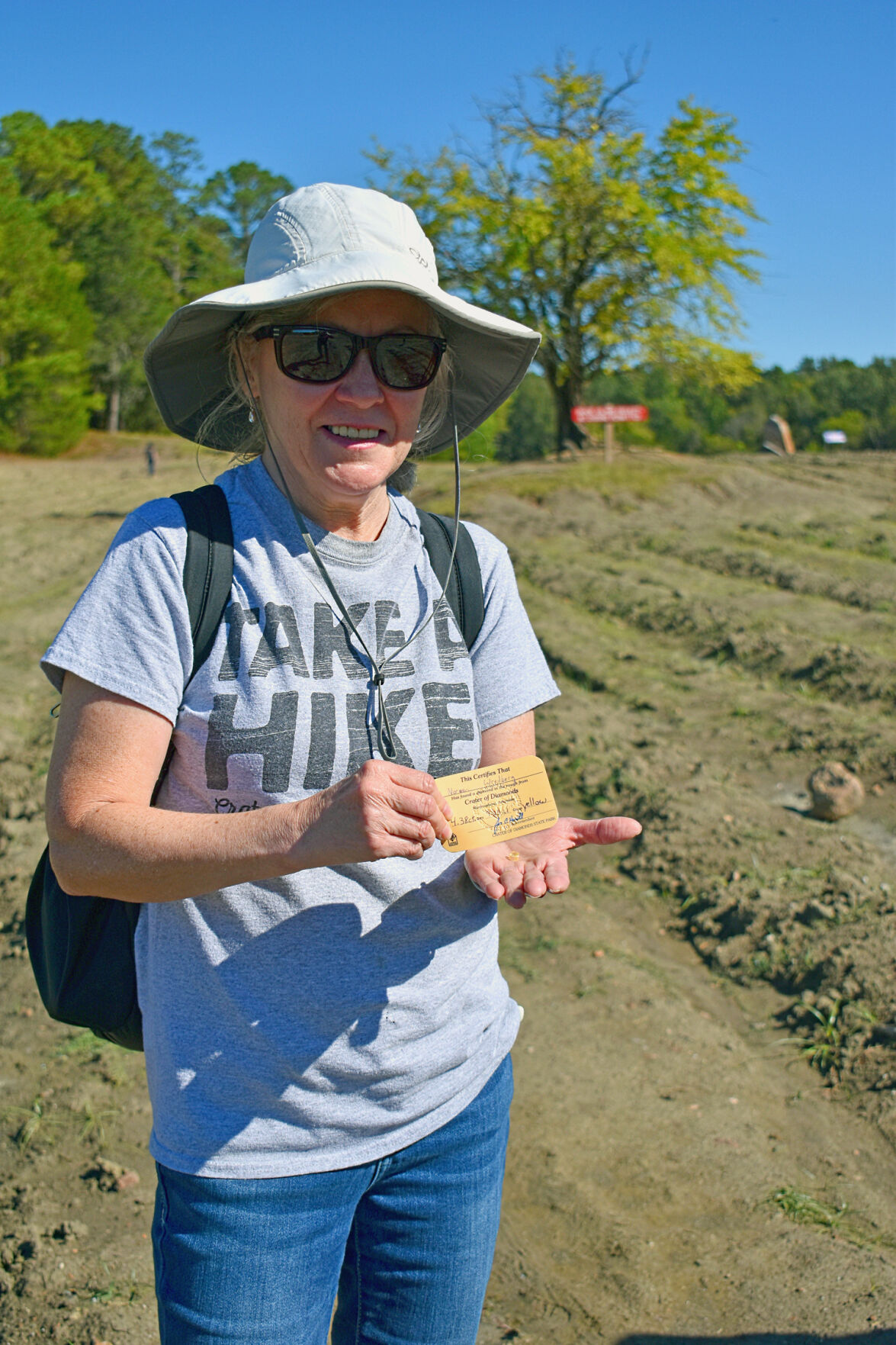 The Lucy Diamond found by Noreen Wredberg at Crater of Diamonds State Park.

Noreen Wredberg of Granite Bay, CA, found the 4.38-carat yellow diamond sitting on top of the ground within an hour of searching. It’s the largest diamond found so far this year at Crater of Diamonds State Park.

Since retiring in 2011, Noreen and her husband Michael have spent much of their leisure time traveling and visiting America’s national parks. During a recent stop at Hot Springs National Park in Arkansas, Noreen realized that they were also close to another destination she had long wanted to visit, Crater of Diamonds State Park.

“I first saw the park featured on a TV show several years ago,” she said. “When I realized we weren’t too far away, I knew we had to come!”

The couple arrived at Crater of Diamonds on Thursday, September 23, a sunny-but-cool fall morning. She started to search in a shaded area near the mine entrance, but her husband suggested they venture farther out.

“It was cold in the shade that morning, so I told Noreen that we should go to the middle of the field, where it was warmer.”

His suggestion paid off about 40 minutes later. She was walking just north of a central pathway in the search area when she spotted the sparkling gem on top of the ground.

She said, “I didn’t know it was a diamond then, but it was clean and shiny, so I picked it up!”

She gave the stone to her husband, who brought it to the park’s Diamond Discovery Center for identification. After examining the stone, park staff informed Michael that he was in possession of a very large yellow diamond.

Park Superintendent Caleb Howell said, “When I first saw this diamond under the microscope, I thought, ‘Wow, what a beautiful shape and color!’ Mrs. Wredberg’s diamond weighs more than four carats and is about the size of a jellybean, with a pear shape and a lemonade yellow color.”

Noreen was surprised and excited when park staff gave her the news a few minutes later, saying, “We really didn’t think we would find one, let alone something that big!”

Park Interpreter Waymon Cox says that many of the park’s largest diamonds are found right on top of the ground. “We plow the search area periodically to loosen the soil and promote natural erosion. Diamonds are somewhat heavy for their size and lack static electricity, so dirt doesn’t stick to them. When rain uncovers a larger diamond and the sun comes out, its reflective surface is often easy to see.”

Weighing 4.38 carats, Noreen’s diamond is the largest found at the park since last October, when a visitor from Fayetteville discovered a 4.49-carat yellow diamond.

Finders of large Crater diamonds often choose to name their gems. Noreen named hers Lucy’s Diamond, for her husband’s kitten. “The name is sentimental to us. Lucy is mostly gray but has slight tints of yellow in her fur, similar to the light yellow of my diamond.”

Noreen isn’t sure what she will do with her diamond but says she might have it cut, depending on the quality. “I don’t even know what it’s worth yet. It’s all new to me!”

Park staff is not trained in diamond appraisals but offers resources to help finders decide what to do with their gems.

As of this publication, 258 diamonds have been registered at Crater of Diamonds State Park in 2021, weighing more than 46 carats in total. An average of one to two diamonds are found by park visitors each day.

Letter to the Editor: Arkansas nonprofit organizations want Legislature to invest in people, not tax cuts

Celebration of Lights Thursday afternoon and evening at SAU

"Songs of the Season" theme for 2021 Magnolia Christmas Parade

Generally speaking, how old do you feel?