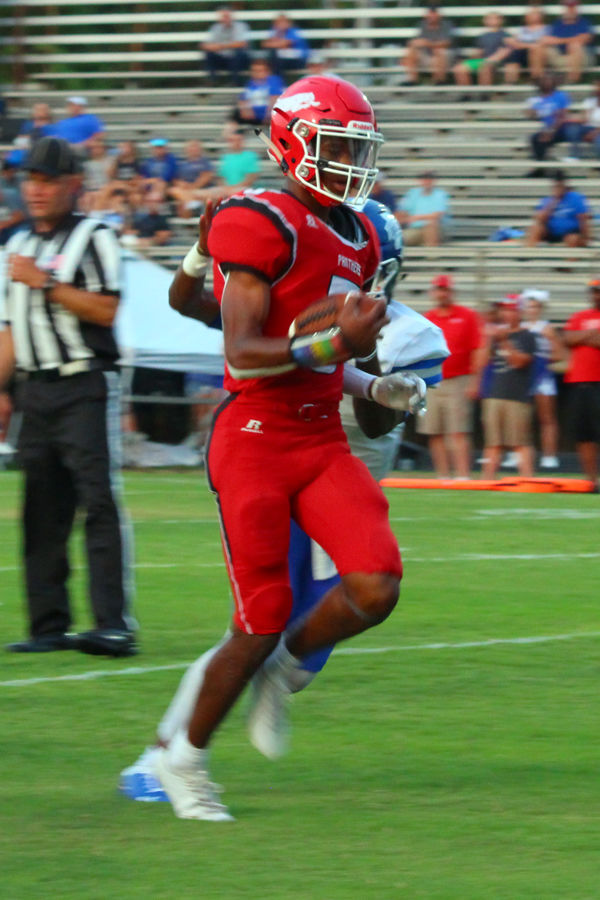 Magnolia quarterback Braelyn Beasley runs with the football during the Panthers 49-18 win against Monticello on Friday night. 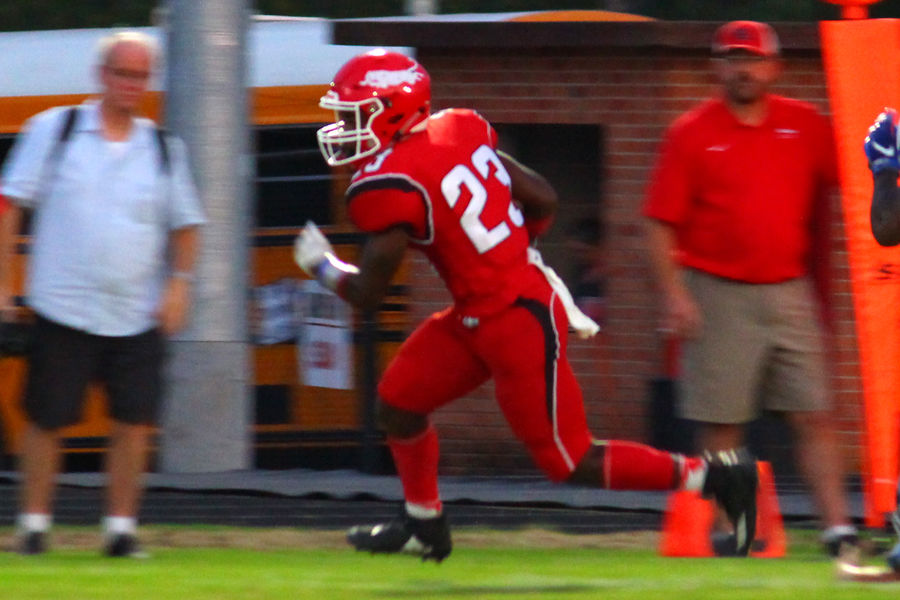 Cameron Warren runs with the football for Magnolia against Monticello. 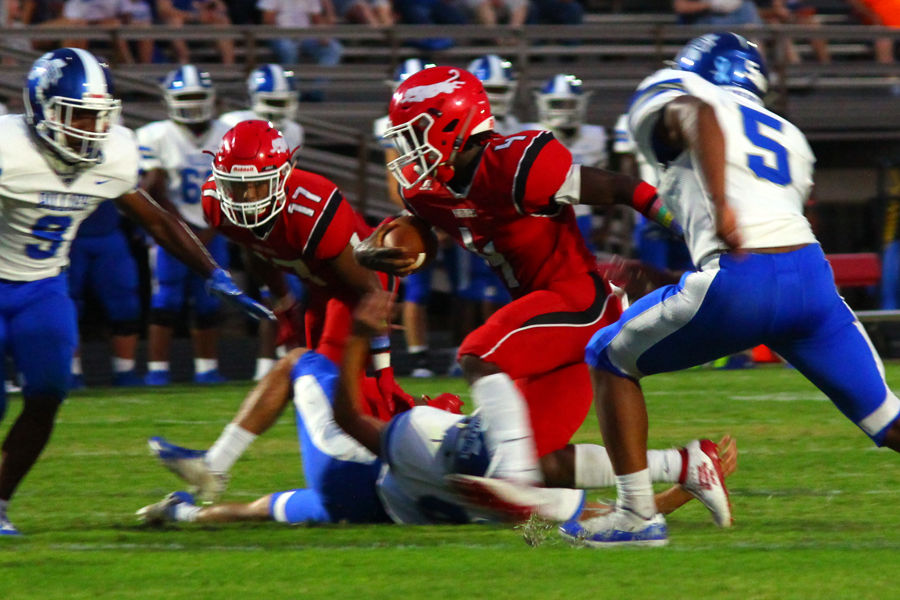 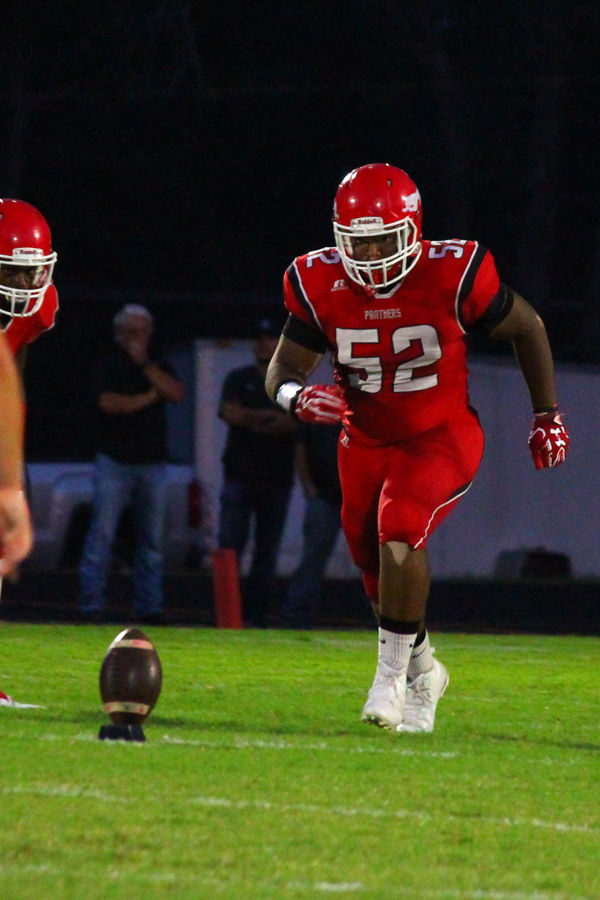 Jakameron Zachary kicks off for Magnolia. 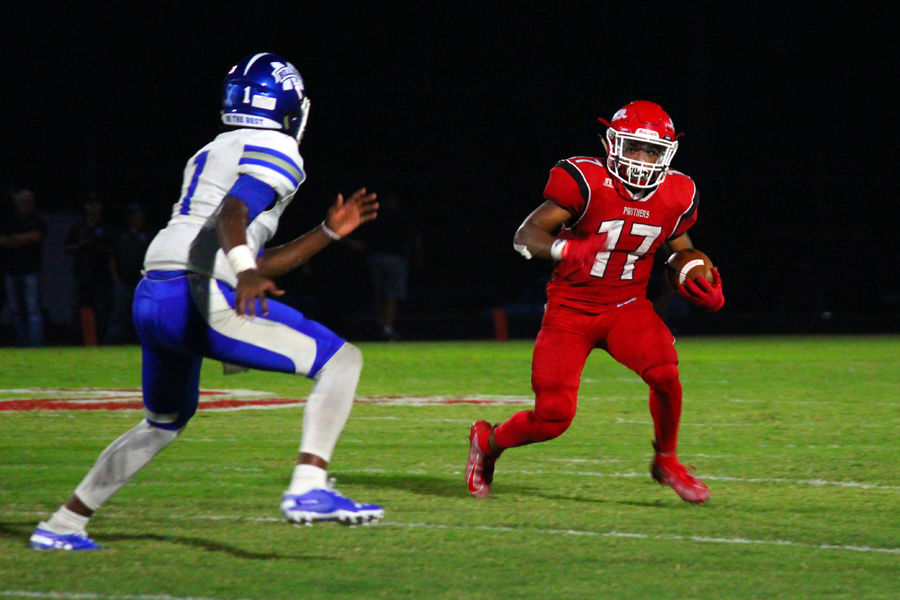 Amir Cooper (17) of Magnolia looks for a way around a Monticello defender. 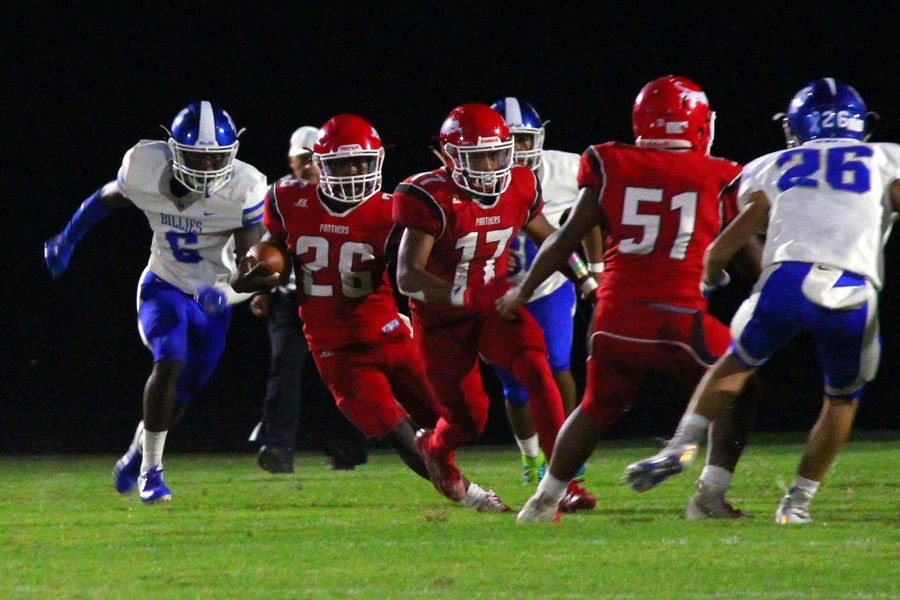 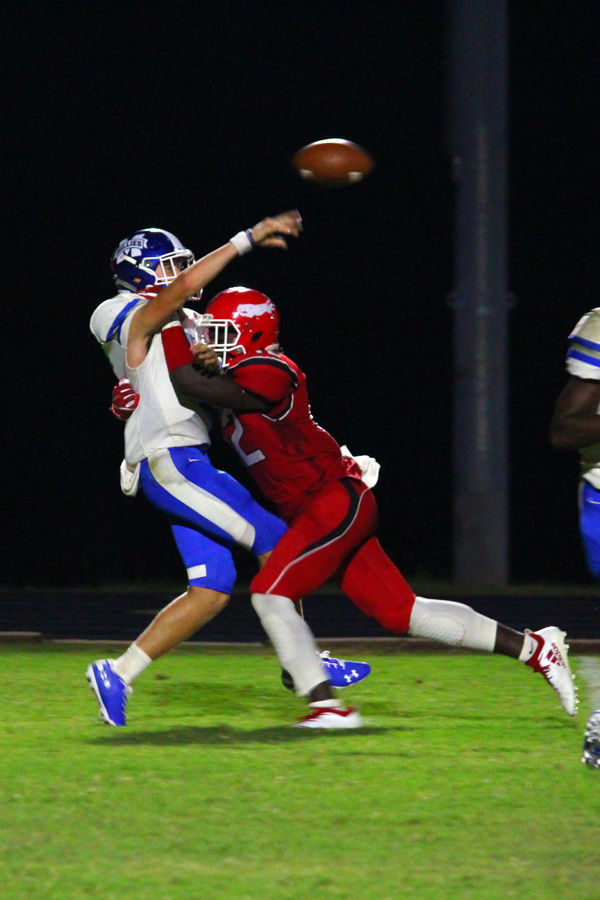 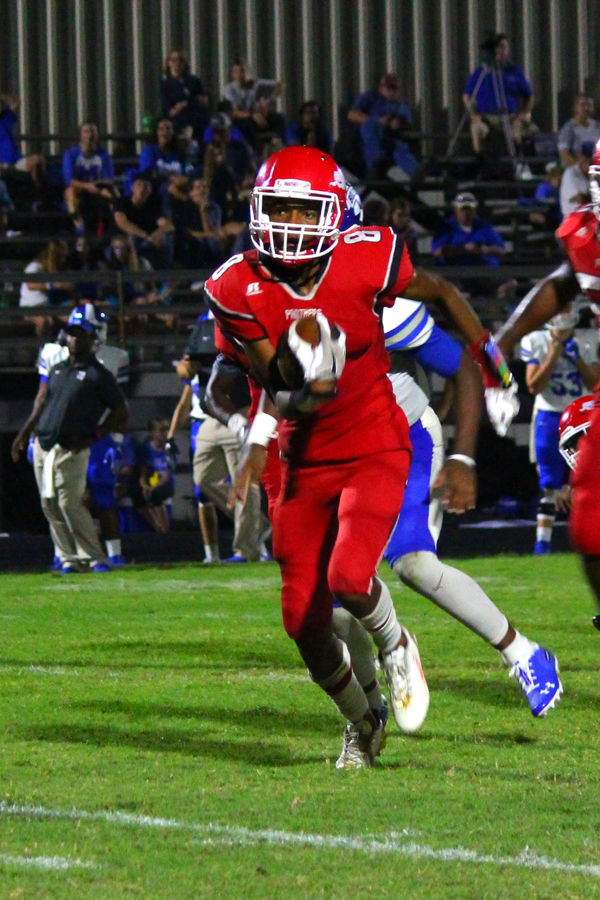 Jaikeim Warren returns a pass interception for a touchdown in Magnolia's 49-18 non-conference win against Monticello. 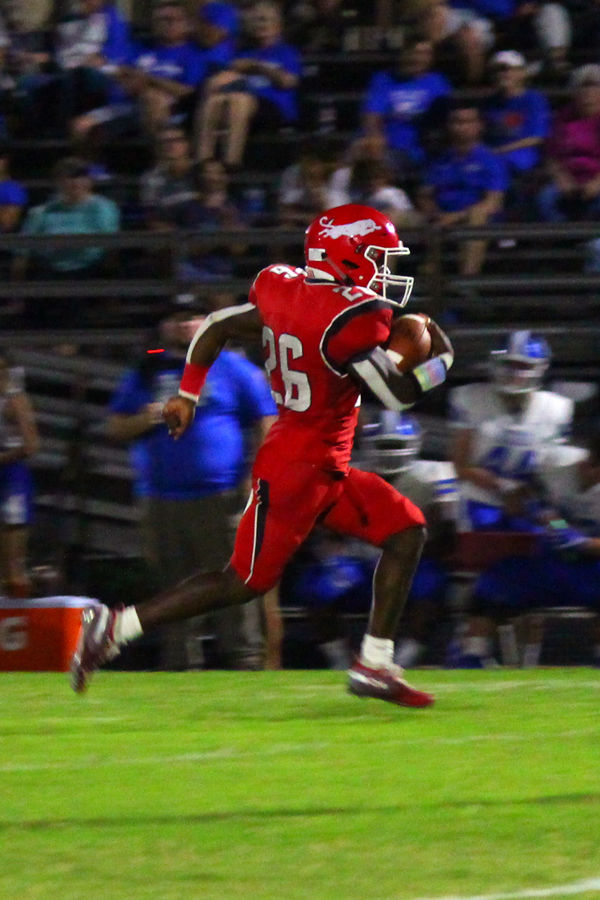 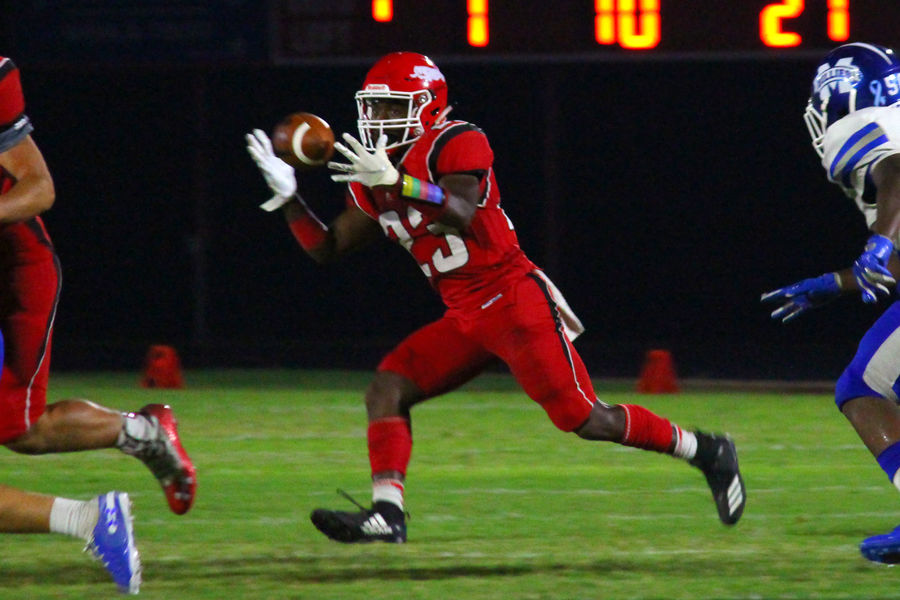 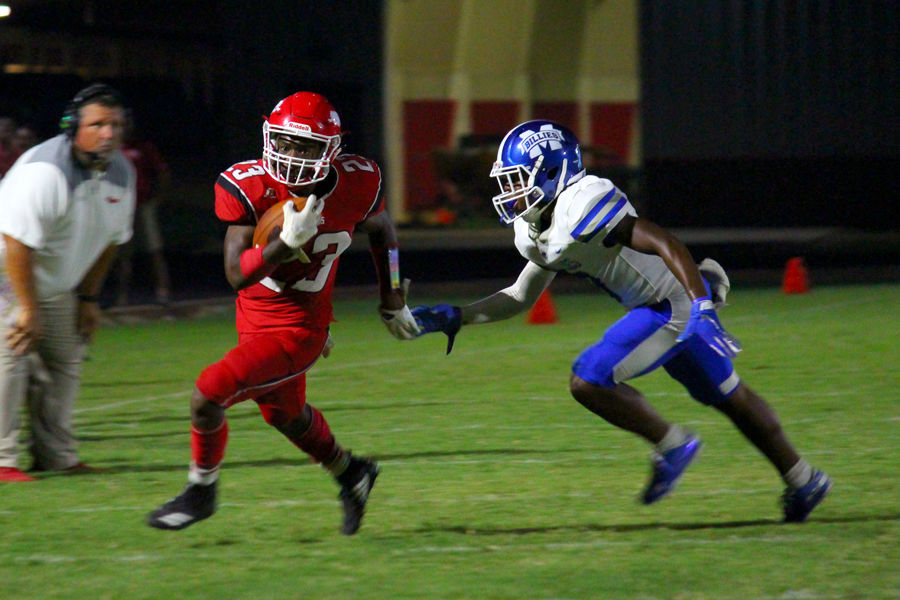 Magnolia's Cameron Warren (23) makes a 26-yard run to the Monticello 1.

James'Darius Smith returns the second-half kickoff 85 yards for a touchdown in Magnolia's 49-18 win against Monticello on Friday night.

Jen Kilgore, special to magnoliareporter.com
1 of 11

Magnolia quarterback Braelyn Beasley runs with the football during the Panthers 49-18 win against Monticello on Friday night.

Cameron Warren runs with the football for Magnolia against Monticello.

Jakameron Zachary kicks off for Magnolia.

Amir Cooper (17) of Magnolia looks for a way around a Monticello defender.

Jaikeim Warren returns a pass interception for a touchdown in Magnolia's 49-18 non-conference win against Monticello.

Magnolia's Cameron Warren (23) makes a 26-yard run to the Monticello 1.

Magnolia mauled Monticello 49-18 on Friday in the Panthers’ final non-conference football game of the year. A pair of long touchdowns by junior James’Darius Smith jacked up the final score for Magnolia.

The Panthers have a rare bye-week before traveling to TexARKana on September 27 for their first Class 5A-South conference game of the season.

The Billies (0-2) suffered another frustrating outing. Monticello has lost 13 straight games since November 2017, and experienced imposition of the mercy rule in all of them – meaning that the Billies lost each game by 35 points or more.

Magnolia (2-1) shut down Monticello’s opening series with a four-and-out before starting a seven-play, 66-yard scoring drive.

The big plays on the drive were a 23-yard pass from Braelyn Beasley to Amir Cooper, and a 16-yard run by Robert Mack that gave Magnolia a first down at the Monticello 9.

Beasley pulled back a handoff and went around left guard into the end zone with 7:06 left in the first quarter. Jay Todd Baker hit the extra point from Tanner Nielson’s hold.

Monticello’s double shifts into unbalanced lines caused Magnolia a lot of confusion early, and Monticello drove to the Magnolia 11. But two defensive plays by DeMarco Walker brought up a fourth down for Monticello as the first quarter ended.

Monticello’s Erik Resendiz attempted a 36-yard field goal on the first play of the second quarter. It was short and wide to the right.

The Panthers put together an 11-play, 80-yard drive. DeMario Walker, playing on offense, converted a third down with a 10-yard run to the Billies 1. He ran for a touchdown on the next play. Baker’s PAT gave Magnolia a 14-0 lead with 8:09 left in the second quarter.

Monticello faced a fourth and 5 at the Magnolia 8 when Stran Smith threw a touchdown to Doerian Allen with 9 seconds left in the half. Magnolia’s Jaikeim Warren broke up a conversion pass attempt as Monticello closed the score to 14-6.

James’Darius Smith was deep to receive the second-half kickoff for Magnolia. He bobbled the football but picked it up, made some moves and ran straight down the field for an 85-yard touchdown. Baker kicked the extra point – a line drive just inside the left upright. Magnolia led 21-6 with 11:43 left in the third quarter.

Monticello mounted a brief comeback with a 66-yard drive that ended with a 7-yard Whitmore run. Jaikeim Warren intercepted the conversion pass as Magnolia led 21-12.

A pair of penalties forced Monticello to kick off from its 20. Magnolia’s Smith returned the kickoff 36 yards. This set up an 18-yard touchdown pass from Beasley to Robert Mack. Baker’s PAT gave Magnolia a 28-12 lead with 7:25 left in the third quarter.

Magnolia threatened again after Beasley aimed a laser at Sidtravious Hampton, who made a 26-yard reception against triple coverage to the Monticello 9.

However, Monticello’s Ryan Franklin intercepted a Beasley pass at the Billies 2.

Panther Stadium was hushed two plays later when Monticello lineman Raylon Shaw went down with an injury. He lay almost motionless for several minutes while trainers tended to him, and the Columbia County Ambulance Service took him to Magnolia Regional Medical Center.

Following the extended delay, Jaikeim Warren intercepted another Billies pass and returned it 21 yards for a Panthers touchdown with 32 seconds left in the third period. Baker’s PAT gave Magnolia a 35-12 lead.

Magnolia took over the football on downs early in the fourth quarter. On the first play from scrimmage, Smith ran for his second big score of the night – a 63-yarder with 10:59 to play. Baker kicked the extra point.

Kendrick Carey rushed for the next touchdown with 9:03 left. Baker kicked the extra point. As Magnolia now led by more than 35 points, the mercy rule was activated and the clock did not stop.

Magnolia’s reserves saw action the rest of the game.

Monticello made one final scoring drive. Jalin Green scored on a 3-yard run with 2:12 to play.

CLICK HERE to read more sports news on our website. Tell your friends and family that thanks to our advertisers, they can read news for free on our website.