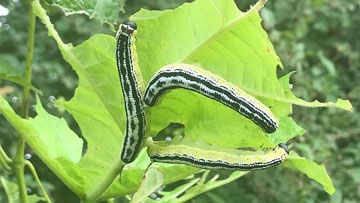 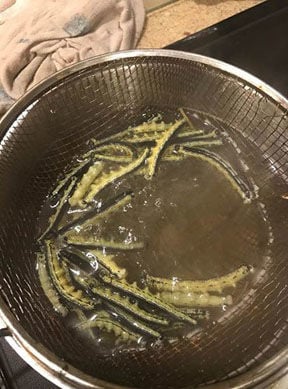 Catalpa worms being boiled before going into cold storage as future bait.

Catalpa worms being boiled before going into cold storage as future bait.

Fish bait can be found in many forms at most tackle retailers. Worms, crickets, minnows, wax worms and other creatures fill boxes and bins. Prepared baits are also found in a wide variety of forms, smells and textures.

All of these baits have their place and time on a hook, but few rival a natural seasonal bait that shows up in Arkansas in mid-summer: the catalpa worm.

The catalpa worm is found only on catalpa trees and typically appears in late June or early July for about two to three weeks. Known by many local names, like “talpy worms,” “taffy worms,” or “catawba worms,” these fat, juicy black and yellow crawlers are highly sought by many old-timers and the younger anglers to whom they’ve passed their knowledge.

The black-and-yellow worms are caterpillars from a sphinx moth, a large brown moth that is often seen around porch or street lights. These moths lay the eggs on the underside of the leaves and then the eggs hatch into the caterpillars. The caterpillars will gorge themselves on the catalpa leaves for about three weeks and then drop to the ground and enter the pupae stage. Though the cycle continues throughout the year, mid-summer is the prime time for these caterpillars in Arkansas.

The search for worms begins in finding a catalpa tree. The catalpa tree can be identified by large leaves that have an almost heart-shaped appearance. The color is usually a lighter green than most other trees that might be found nearby.

The tree can also have large white flowers for a short period of time followed by long, bean-like seed pods. The trees are often found around old home places or in fence rows. Trees near homes or agricultural areas can have worms, but usually those in more remote areas provide a better opportunity to find a bucket full of worms as insecticides for mosquitoes and other pests can deter these insects as well.

Likely trees can be identified throughout the year and occasional visits in summer can be made to check for worms. Trees with active worms can easily be identified by the trained eye as the leaves will show signs of being eaten by the voracious caterpillars. Hardcore worm hunters often use binoculars to check remote trees for worm damage instead of making the trek to a tree that might not have worms.

Once the worms are found, the tools necessary for gathering are simple. Willing hands are the first tool as the worms can be pulled directly from the leaves. They will excrete some wonderful yellow/green fluid when grabbed, so gloves might help. Many worm getters use a long pole to shake the worms off limbs. A long rope can also be tossed over limbs to shake the worms out of the tree. Once gathered, place the worms in a plastic container with a few leaves from the tree. If kept in a cool area, they can last a few days until the next fishing trip.

If there seems to be a bumper crop of worms or if they will not be used immediately, the worms can be preserved for future use. The best method to keep worms for the long term is to boil the worms as soon as they are harvested. Heat a pot of water to a light boil and toss in the worms for about one minute. Once the worms have stiffened just a bit, remove from the boiling water and place the worms on paper towels and allow them to dry. Once dry, place a handful of cornmeal and the worms in a plastic bag, label the bag and stick them in the freezer. They can then be used as needed.

Catalpa worms catch bass and bream, but they make especially great bait for channel catfish. A bottom fishing rig with a no. 2 baitholder hook tipped with a catalpa worm should yield a few catfish in most rivers and lakes in Arkansas.

CLICK HERE to read more outdoors news on our website. Tell your friends and family that thanks to our advertisers, they can read news for free on our website.