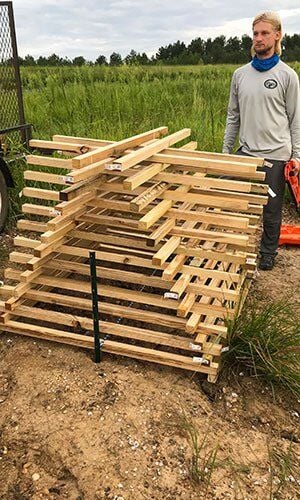 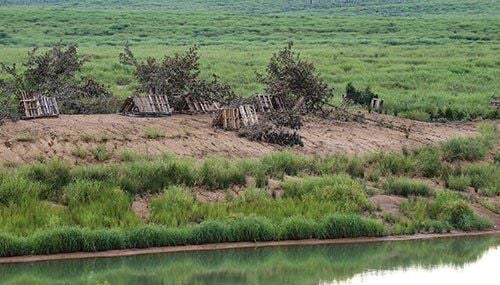 Monticello-area businesses have contributed wooden pallets for fish protection structure in Lake Monticello, which is being refurbished.

Monticello-area businesses have contributed wooden pallets for fish protection structure in Lake Monticello, which is being refurbished.

A massive habitat project for the bed of Lake Monticello involved 15 biologists from across Arkansas last week.

They joined forces to create an extensive labyrinth of wooden cover in key portions of the lake while it is undergoing repairs.

Lake Monticello had to be drained by the lake’s owner, the City of Monticello in 2019 because of failing integrity of the lake’s levee. The city conducted a partial drawdown in 2017 to repair the levee, but the solution did not hold. This resulted in a complete draining of the lake and larger repair project.

Kris Nault, regional fisheries supervisor for southeast Arkansas is taking the opportunity to make some lemonade out of the lemons fate has dealt. With the lake being drained, placing large fish attractors and habitat can be conducted much more efficiently than when a lake is filled with water.

“We placed a variety of cover types throughout the lakebed,” Nault said. “We have Pennsylvania porcupine structures, pallets with hardwood brush and larger brush piles from trees gathered around the shoreline.”

The Pennsylvania porcupine structures (also called “fish cribs”) are pyramid-shaped constructions made with treated 2-inch-by-2-inch boards to create small gaps and harbor baitfish and young-of-the year fish in safety. This in-turn should attract larger predators to sit along overhangs in the structure, which Nault says may last up to 15 years before it rots away.

Elsewhere, hundreds of pallet structures have been staked down along the lakebed near humps and old roads. Unlike many pallet structures placed after a lake is flooded, these were given the added enhancement of hardwood brush, cut from trees surrounding the shoreline. Added to this were 41 larger brush piles created by another crew of AGFC biologists cutting full-sized trees and dragging them into place with the use of a tractor. The many types of cover appeal to different situations and fit the many preferences of the various anglers who fished Monticello when it was full and thriving.

“All of the biologists working out here are anglers too,” Nault said. “That knowledge, plus the knowledge we gain from sampling fish populations is guiding where we’re placing these structures. We’ll add the coordinates to the agency’s interactive map on the website when the lake is flooded again, so people can quickly find them using a GPS unit.”

Nault says the city has been great partners in the habitat project, and hopes everything stays on track well into the future.

“They’ve really been great to work with,” Nault said. “They delivered pallets and other materials for us to use, and they have allowed us to cut whatever trees we need to create cover on the lakebed,” Nault said. “They even let us use one of their tractors to help manage some of the larger brush piles.”

Mayor Paige Chase said she’s committed to help however she can to make sure the project continues to move forward.

“We want to add bike trails and other opportunities near the lake’s future shoreline, too,” Chase said. “This lake is very important to the city and surrounding area. We’re just waiting on final plans from the engineer and we can get bids started for the levee repair.”

Although the drawdown was not ideal, it may be just what the lake needs to regain some of its former glory. At 1,520 acres, Monticello was a prime location for anglers targeting bream, crappie and especially trophy-class largemouth bass during the early 2000’s. The lake was a testament to the AGFC’s Florida largemouth bass program and many anglers believed the next state record largemouth was only a cast away from happening. But as the lake aged, its productivity began the eventual slow decline faced by most reservoirs. The appearance of yellow bass, a native fish species that’s a voracious eater that rarely grows as large as one pound, also hindered productivity. The draining of the lake will enable biologists to not only create new habitat, but will give them the opportunity to remove undesirable species by treating the standing water in the lakebed with rotenone.

“If the rotenone treatment goes well, the undesirable species will be removed and we’ll be able to start again with a clean slate once the lake is refilled,” Nault said.

Additionally, vegetation that has grown since the lake was drained, as tall as 6 feet in some places, will offer ample cover for baitfish, then break down, releasing nutrients into the water and boosting the lake’s food supply. Similar drawdowns and renovations have yielded excellent results at Lake Atkins in Pope County and Lower White Oak Lake in Ouachita County. While the boom in production has waned at Atkins, it is just beginning to take hold in White Oak Lake’s bass population.

“We hope to see a similar effect here once the water comes back,” Nault said. “We’re still working on plans and trying to do what we can to improve the lake as we see construction move forward. Habitat improvements will continue to be made by local AGFC staff as long as the lake is dry.”

With luck, Monticello may be back on anglers’ bucket lists once repairs are complete and biologists work is complete.