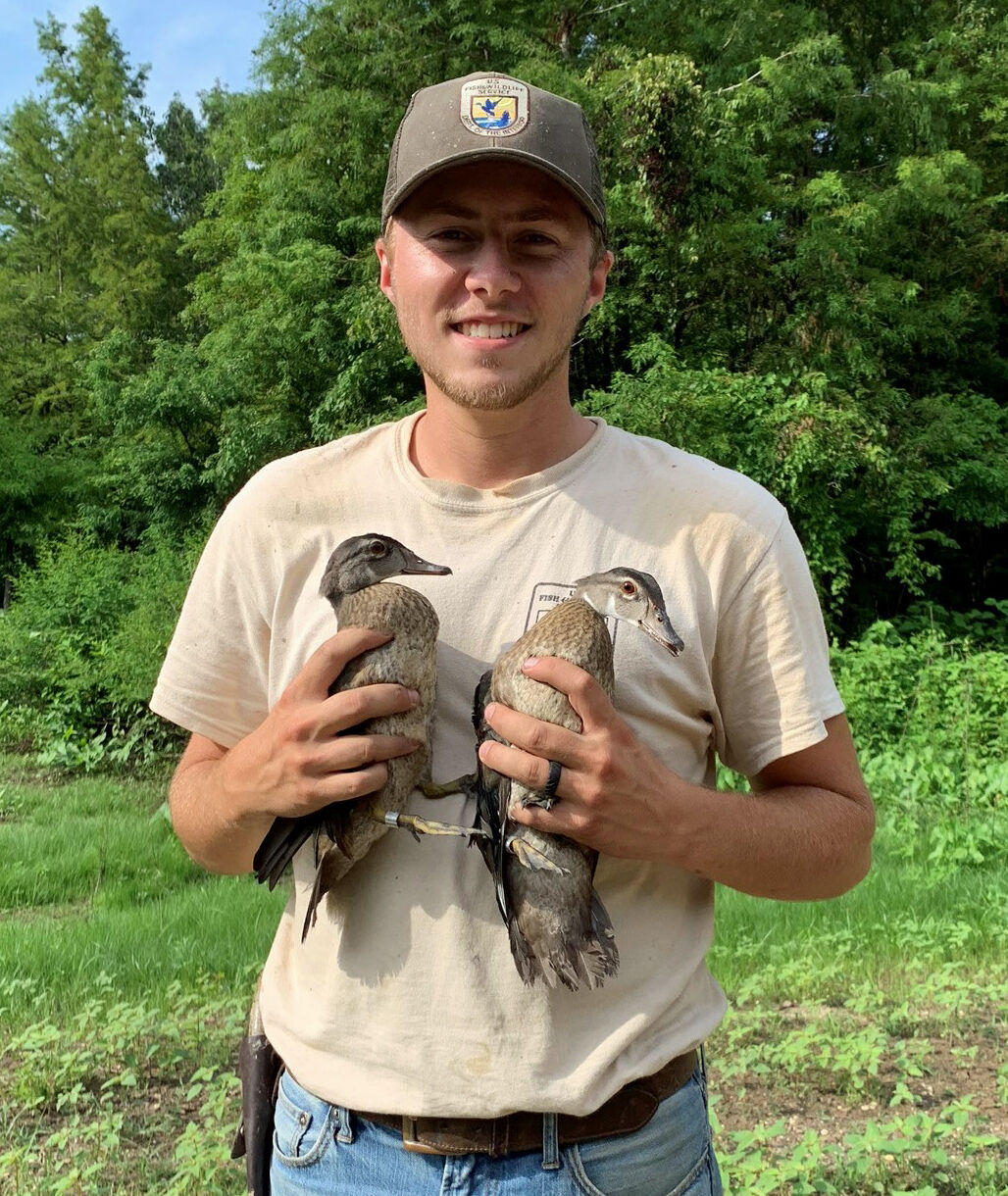 Clayton Whitaker.spent a summer internship with the U.S. Fish and Wildlife Service near Hamburg. 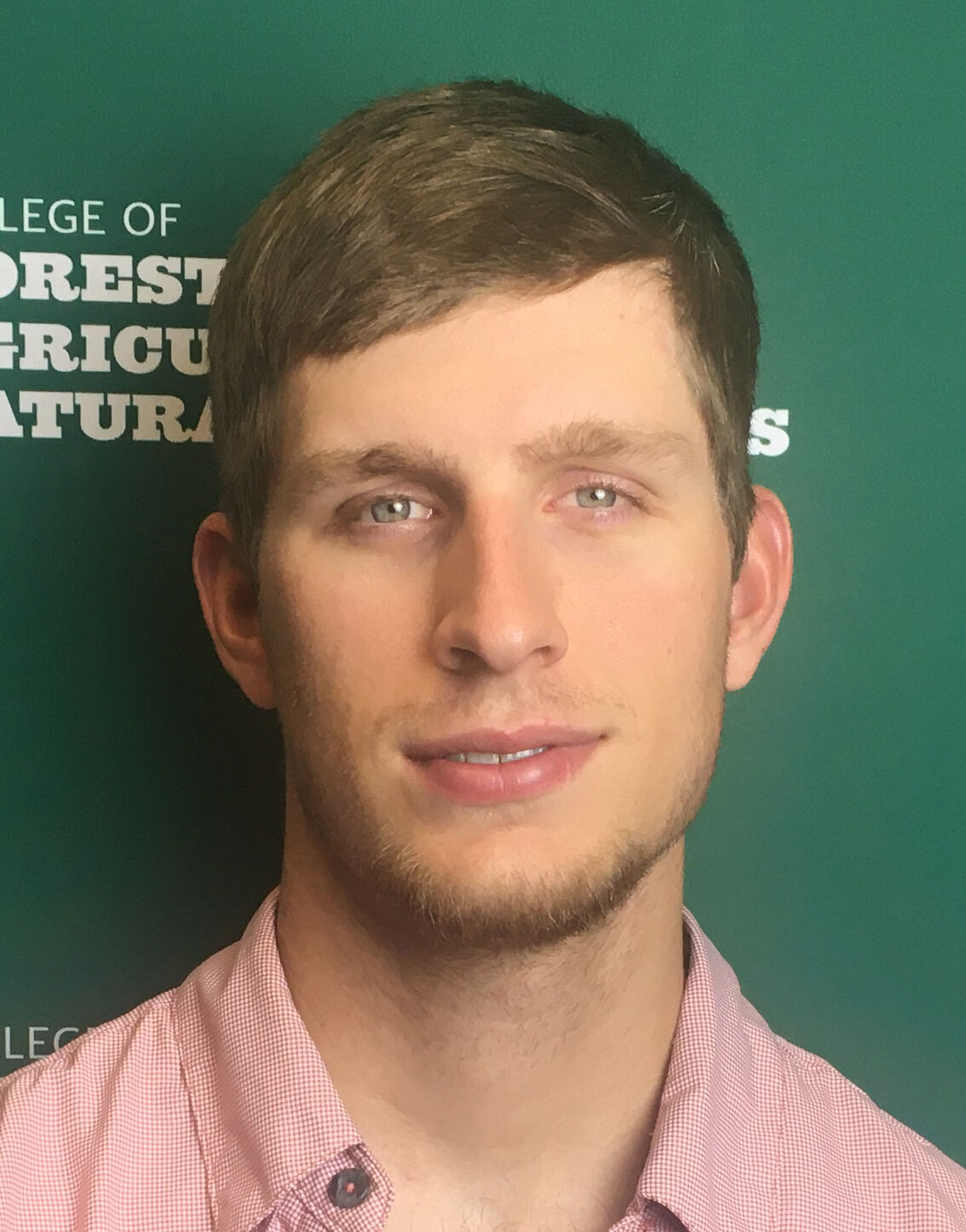 University of Arkansas-Monticello wildlife major Dylan Rice had a summer internship with the U.S. Fish and Wildlife Service.

Clayton Whitaker.spent a summer internship with the U.S. Fish and Wildlife Service near Hamburg.

University of Arkansas-Monticello wildlife major Dylan Rice had a summer internship with the U.S. Fish and Wildlife Service.

The summer of 2020 was pivotal for University of Arkansas-Monticello wildlife majors Dylan Rice and Clayton Whitaker.

Both students completed summer internships for the U.S. Fish and Wildlife Service.

While many people in Southeast Arkansas faced layoffs or unemployment due to COVID-19, the two UAM students were showing up for work at the Felsenthal and Overflow National Wildlife Refuges. Internships with federal agencies can be challenging to obtain.

The doors for Rice and Whitaker were opened when the U.S. Fish and Wildlife Service partnered with the UAM College of Forestry, Agriculture, and Natural Resources to provide 10-12-week internships.

Rice, 21, is a senior from Fordyce. He spent his summer at the 12,000-acre Overflow National Wild Refuge near Hamburg. His internship included a variety of duties. Those assignments included trapping and removing hundreds of feral hogs, blowing up beaver dams, and painting hunting trails with yellow markers.

Rice says they would use a tractor and rake or use explosives to remove dams.

"Sometimes, the beaver would rebuild the dam in the same spot two or three days in a row," said Rice. He says the beavers are overpopulated in the area. They have no natural predators. The purpose of removing the dam was to protect the hardwood trees from the standing water.

Whitaker, 23, is a 2020 UAM graduate from Monticello who did his internship at the 65,000 acres Felsenthal National Wildlife Refuge near Crossett. He too, spent the summer trapping and eradicating wild hogs with cell phone activated traps.

By the end of summer, he and his colleagues had dispatched more than 200 wild hogs.

"I was grateful to have a summer job. I think it was good to get my name in front of the U.S. Fish and Wildlife network," said Whitaker. He hopes to turn the internship into a full-time job.

"If you can get the field experience, it can set you up for success, instead of just going to class for four years. I would strongly recommend that you apply whenever you hear about these types of internships, especially with an agency like U.S. Fish and Wildlife. You can't go wrong working for a federal agency. I'm glad I did it," said Whitaker.

Paid internships provide students with a sense of value and being a paid professional says UAM Wildlife Professor and advisor, Don White. White has been advising wildlife students at the college for 20 years. "Obtaining and completing an internship is essential," White says. He discusses the work experience's value with prospective students and their parents from the very beginning, not their senior year. "Natural Resources students who do not do an internship while still attending school find their chances of full-time employment are pretty slim," said White.

"The summer internships are win-win. Students get real hands-on experience, while the U.S. Fish and Wildlife Service gets a mechanism to recruit future wildlife biologists and foresters,” said White.

In addition to the internship providing three months' worth of in-field training, the student has a chance to explore whether this is the career to pursue.

“Like all federal agencies, they want to look at you," said White.

"They want to have some experience with a candidate before a full-time or permanent job is offered. A summer-long 10-12-week internship is just perfect for getting a good feel for what you're all about.”

Among the top requirements being sought is "integrity."

"They want people who will do what they say they'll do. We still need people who will show up every day and do the tasks they are given to the best of their ability. Sounds a bit old fashioned," said White.

While the list of assignments was varied and long for both Whitaker and Rice, Whitaker took pleasure in banding wood ducks. It was something he already knew a little bit about because of his experience with another project at UAM. That project involves banding thousands of ducks in the spring to monitor the birds' migratory travels.

Rice said one of his highlights was participating in a bat survey. His crew would go out at night and use acoustic monitoring to detect the bats. Traveling at night throughout the wildlife refuge, sonar pulses were recorded to determine the animals' species, location, and population density.

"I was expecting to gain some good experience and to get a foot in the door. I was hoping to learn the ins and outs of the U.S. Fish and Wildlife Service. That's where I would like to work. I wanted to see how they operate. I got everything I wanted out of it,” said Rice.

As part of their internships, both men received ATV training and certifications.

The first-time internships were managed by U.S. Fish and Wildlife biologist Nick Wirwa based out of Crossett.

"The whole objective is to become as qualified as you can to get a job at the end when you graduate. It really is critical to getting an appointment with the federal agency," said Wirwa.

Wirwa says the internship program has already been funded again for next year. The internships pay about $15 an hour. Wirwa thinks they would like two, possibly three interns from UAM, for the 2021 summer season. Those internships include students with interests in wildlife, forestry, and geographic information systems (GIS).

Village Water Association gets $400,000 in loans for water tank work

SAU+VISTA performs acts of service in remembrance of September 11

Magnolia principals report to school board