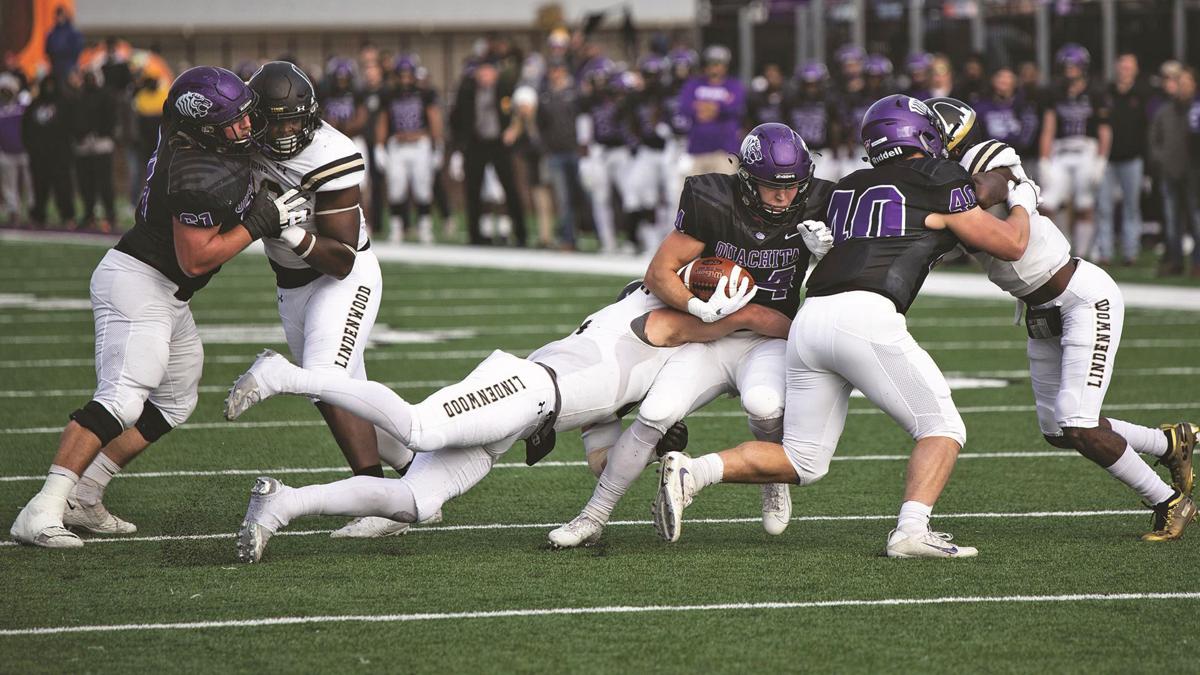 Ouachita’s Brockton Brown (35) rushes against Lindenwood on Saturday in Arkadelphia. 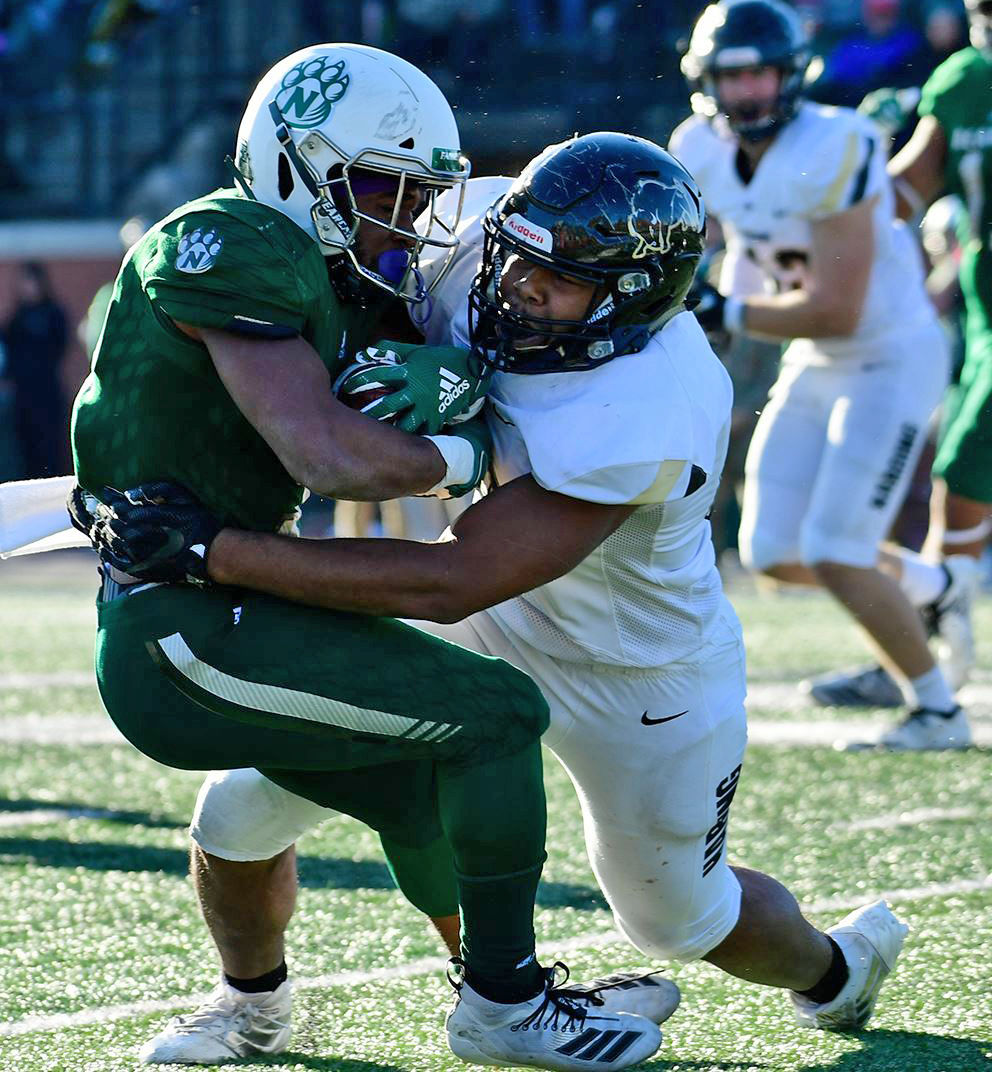 Harding’s defense limited high-scoring Northwest Missouri to 205 yards, but its offense was held to 151 yards, including 63 yards on its only scoring drive.

Ouachita’s Brockton Brown (35) rushes against Lindenwood on Saturday in Arkadelphia.

Harding’s defense limited high-scoring Northwest Missouri to 205 yards, but its offense was held to 151 yards, including 63 yards on its only scoring drive.

Lindenwood advances to the second round of the NCAA Division II playoffs and will travel to Maryville, MO next Saturday to play against Northwest Missouri State.

ARKADELPHIA – The fifth-ranked Ouachita Baptist Tigers lost in a shootout against the Lindenwood Lions.

After taking a touchback on the opening kickoff, the Lions scored first on a field goal at the end of a 17-play, 71-yard drive that used just under six minutes. LU's Brett Garner connected on a 21-yarder from the left hash, his seventh field goal of the season.

The Tigers answered quickly. After a 15-yard kickoff return by senior Allie Freeman, senior running back Brockton Brown found on a seam on the LU sideline for a 72-yard touchdown run on the first play from scrimmage. It was a career-long for Brown. Freshman Gabe Goodman added an extra point to put the Tigers up 7-3 with 8:58 remaining in the first.

Lindenwood answered on the next drive and took a 10-7 lead on a 14-yard touchdown keeper by quarterback Cade Brister to cap a seven-play, 78-yard drive that used 2:35.

The Tigers closed the first-quarter scoring by regaining the lead at the 4:09 mark on a 12-yard touchdown run by Brockton Brown to cap a five-play, 74-yard drive that used 2:08.

Ouachita took a two-score lead early in the second quarter on a nine-yard touchdown pass from sophomore quarterback Brayden Brazeal to sophomore Hayden Waller to cap a 13-play, 66-yard drive that used 7:06. The Tigers led 21-10 at that point.

The Lions capped the first-half scoring on a 14-yard touchdown pass from Brister to Erik Henneman with 6:34 remaining before half to cap a seven-play, 65-yard drive that used 3:45. Ouachita led Lindenwood 21-17 at the halftime break.

The second half scoring started with the Lions taking a 24-21 lead on a four-yard touchdown run by Nash Sutherlin with 11:02 remaining in the third to cap a seven-play, 63-yard drive that used 2:43.

The Tigers answered to take a 28-24 lead at the 7:31 mark of the third on Brockton Brown's third rushing touchdown of the game, this time from four yards out to cap an eight-play, 75-yard drive that used 3:31.

The shootout continued in the fourth quarter with Ouachita striking first at the 12:25 mark. Brazeal found Waller wide open down the Tiger sideline for a 47-yard touchdown pass to put the home team back on top 35-31.

Lindenwood answered on the ensuing kickoff when Spencer Redd weaved through the OBU coverage unit for a 97-yard return for a touchdown to give the Lions a 38-35 lead with 12:07 remaining.

The Lions put what ended up being the game-winning points on the board with 1:24 remaining in the fourth on a 30-yard field goal by Brett Garner to cap a 10-play, 62-yard drive that used 4:38.

The stage was set for a potential come-from-behind score once again for the Tigers. Following a kickoff return to the Ouachita 42-yard line, Brazeal connected with freshman receiver Keemontrae McKnight on a pass to the sideline for 14-yards, but on the next play, Brazeal was picked off by LU's Jordan Perry on a long pass down the same sideline to seal the victory.

MARYVILLE, MO -- Harding scored its only touchdown on a 6-yard pitch to Tristan Tucker with just over a minute left in its at Northwest Missouri State.

Harding's potential game-winning two-point conversion attempt, also on a pitch, came up just short and the Bisons fell 7-6 in a defensive classic.

The loss ended Harding's season at 10-2, its fourth straight season with nine or more wins.

Northwest Missouri scored on its first drive of the game, going 75 yards on nine plays and picking up three first downs before Braden Wright hit Kyle Raunig in the center of the end zone on a 4-yard TD pass.

It was all defense for the rest of the game. Northwest had 12 more drives, none longer than 35 yards, and Harding forced nine punts. Of the other three drives, one ended on a missed field goal, one ended on downs and the other ended the game.

Northwest entered the game averaging 46.6 points and 453.6 yards of total offense. Harding's defense limited the Bearcats to one score and 205 yards. The Bisons had 10 tackles for loss, including five sacks.

Northwest's defense was also solid. Harding rushed for a season-low 151 yards, gaining 63 of them on the final drive of the game. Starting quarterback Preston Paden played the first series for Harding but gave way to backup Robert Wilcke after suffering an injury. Wilcke led Harding with 64 rushing yards on 20 carries.

Poll: Most readers not ready for return to restaurants

Crossett trucker dies in collision with tree near Shongaloo

Powerball rolls over to $125 million