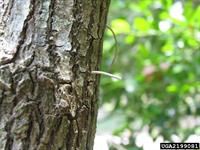 South Arkansas residents are already familiar with the threat posed by emerald ash borer, but a new threat to trees has emerged in North Louisiana.

Laurel wilt, a devastating disease of a number of Louisiana trees in the Lauraceae family, has recently been confirmed in sassafras trees in Union Parish. Union Parish is located south of Union County.

The disease is caused by a fungus that clogs the water-conducting tissue of the tree. As a result, the affected tree wilts and eventually dies, according to LSU AgCenter “Plant Doctor” Raj Singh.

Brown leaves remain attached to the branches for one year or more in the case of redbay, but shed quickly in other host trees. Removing bark from infected trees reveals black discoloration of sapwood, Singh said.

Early symptoms of laurel wilt can be easily misdiagnosed with the damage caused the black twig borer, Singh said.

People who notice symptoms of laurel wilt on susceptible host trees listed above, contact Singh at 225-578-4562.