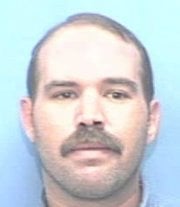 Donnie Hux was killed in a gun battle with Union County authorities on Sunday night. He was wanted for killing an Arkadelphia man,and for kidnapping his ex-wife.

Amy Huckabee of Arkadelphia was found dead Sunday night. Huckabee was presumed kidnapped by her ex-husband, Donnie Hux of El Dorado, who was killed in a gunbattle west of El Dorado about 9 p.m. Sunday. Huckabee's husband, Sandy Huckabee, was found slain at the couple's Arkadelphia residence on Sunday morning.

Donnie Hux was killed in a gun battle with Union County authorities on Sunday night. He was wanted for killing an Arkadelphia man,and for kidnapping his ex-wife.

Amy Huckabee of Arkadelphia was found dead Sunday night. Huckabee was presumed kidnapped by her ex-husband, Donnie Hux of El Dorado, who was killed in a gunbattle west of El Dorado about 9 p.m. Sunday. Huckabee's husband, Sandy Huckabee, was found slain at the couple's Arkadelphia residence on Sunday morning.

Donald "Donnie" Hux shot and killed his ex-wife before he was shot Sunday night, the Union County Sheriff's Office said in a brief statement released Monday.

Hux died after a Sunday night gun battle with Union County authorities at an undisclosed location west of El Dorado.

The statement said that about 9 p.m., the Union County Sheriff's Office received information that Hux, who was wanted for the kidnapping of Amy Huckabee, his ex-wife, and for the murder earlier on Sunday of her husband in Arkadelphia, had switched vehicles.

"The caller gave a description of the vehicle and deputies along with task force officers responded to the area where the vehicle was last seen. Deputies located the vehicle parked in a wooded area on the west side of Union County. In the events that followed, Donald Hux shot Amy Huckabee followed by deputies fatally wounding Hux," the statement said.

The statement said that the Arkansas State Police took over the investigation of the shootings at the Sheriff's Office's request. The office referred any further questions to the state police's investigative unit in Pine Bluff.

No officers were reported injured during the shooting.

Mrs. Huckabee, of Arkadelphia, was kidnapped early Sunday after Hux broke into her home and shot and killed her husband, Sandy Carl Huckabee. Sandy Huckabee's father was the first cousin of former Gov. Mike Huckabee's father, according to press reports.

Sandy Huckabee was killed at the couple's residence at 2304 Forrest Park Drive on the north side of Arkadelphia about 4 a.m. Sunday, said Amy Huckabee's cousin, Alicia Hunter of Magnolia.

Huckabee was shot while he slept, Hunter said. Amy Huckabee and her three children were taken from the home but the children were dropped off at the home of Hux's parents, she said. The parents live on Murray Lane off Arkansas 15 southwest of El Dorado.

Columbia County Sheriff Mike Loe said Sunday afternoon that his deputies searched for Hux earlier in the day in the Atlanta area. They had information that Hux may have a deer camp in the vicinity. They did not find Hux or the vehicle he was believed to be using.

Union County Sheriff Mike McGough issued a statement Sunday afternoon asking that the public be on the lookout for a tan-colored 2005 model Chevrolet extended cab pick-up truck with an Arkansas license plate reading 487 MZD. Hux was officially wanted in Clark County on charges of capital murder, kidnapping, possession of a firearm by certain persons and aggravated residential burglary.

According to Sandy Huckabee's Facebook page, Mr. Huckabee was self-employed as a psychological examiner. He also worked for ECCEL in El Dorado in a similar position. Huckabee was a 1979 graduate of Hope High School and received degrees in biblical studies and psychology from Ouachita Baptist University in 1990. He held a master of science degree in clinical psychology from Northwestern State University, graduating in 1992.

Amy Huckabee was a Springhill, La., native and graduated from Springhill High in 1993. She graduated from Southern Arkansas University in Magnolia with a degree in elementary education in 1997 and was a teacher in Arkadelphia.

Hux, 36, had been in and out of legal trouble in the states of Texas and Louisiana during the past two years. Most recently, Hux pleaded guilty in October to a misdemeanor assault charge in Caddo Parish, Louisiana. He was first charged with two counts of attempted aggravated sexual assault.

A poster purporting to be Hux posted two statements Saturday on the El Dorado, Arkansas Forum page of topix.com, claiming that the sexual assault charges against him were false. "If you really know me you know I'm a good person. If you think otherwise you don't know me at all," the post said in part.