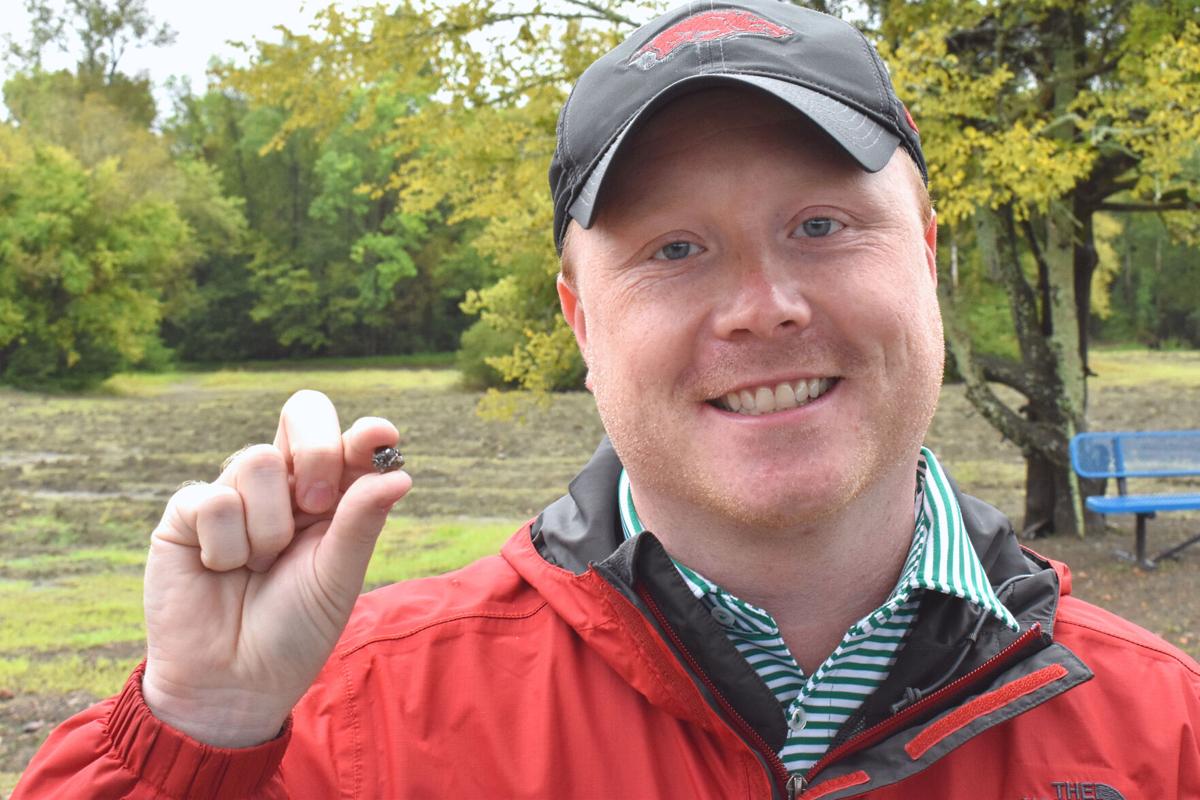 Kevin Kinard and the 9.07-carat diamond he found at Crater of Diamonds State Park. 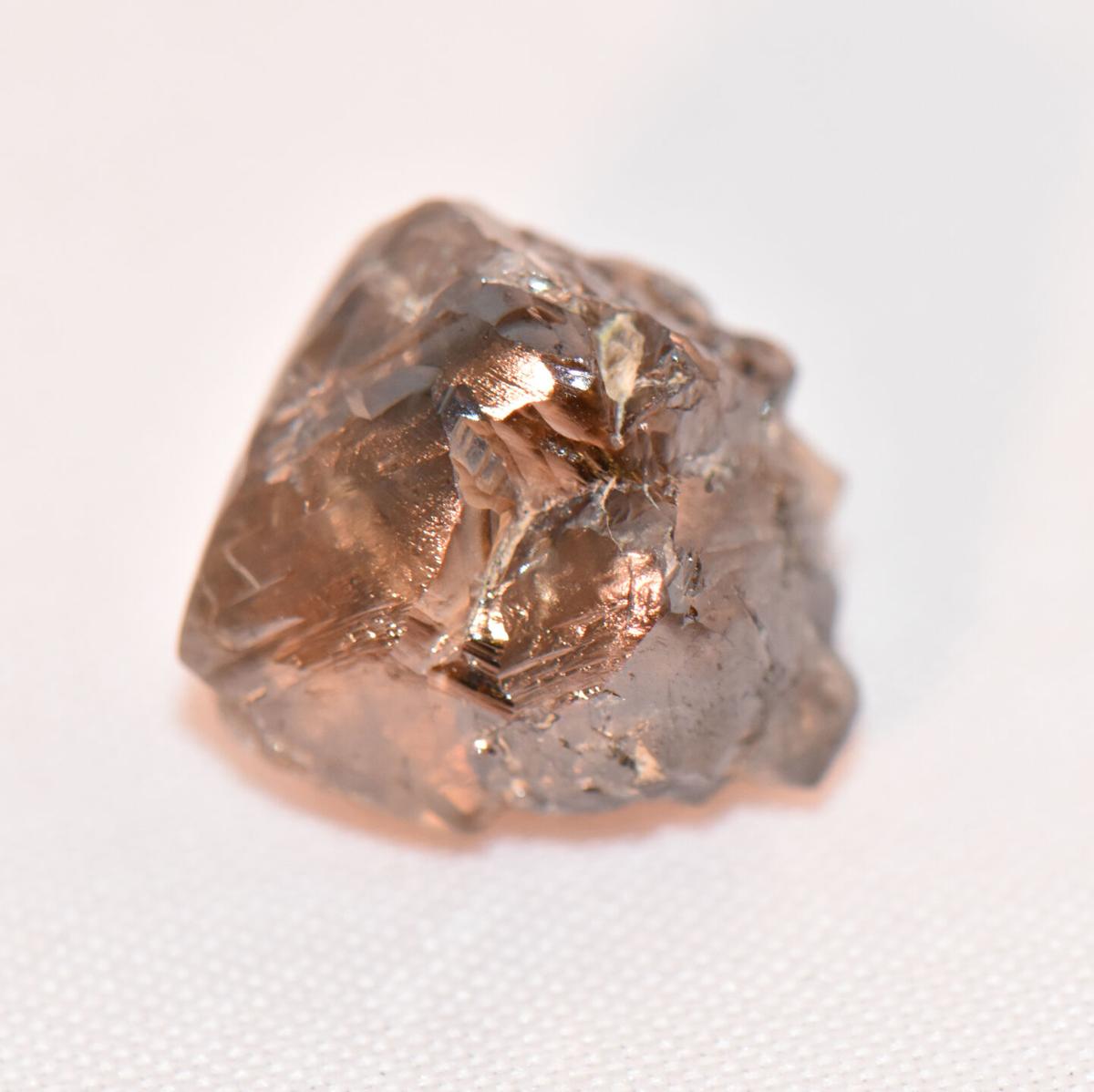 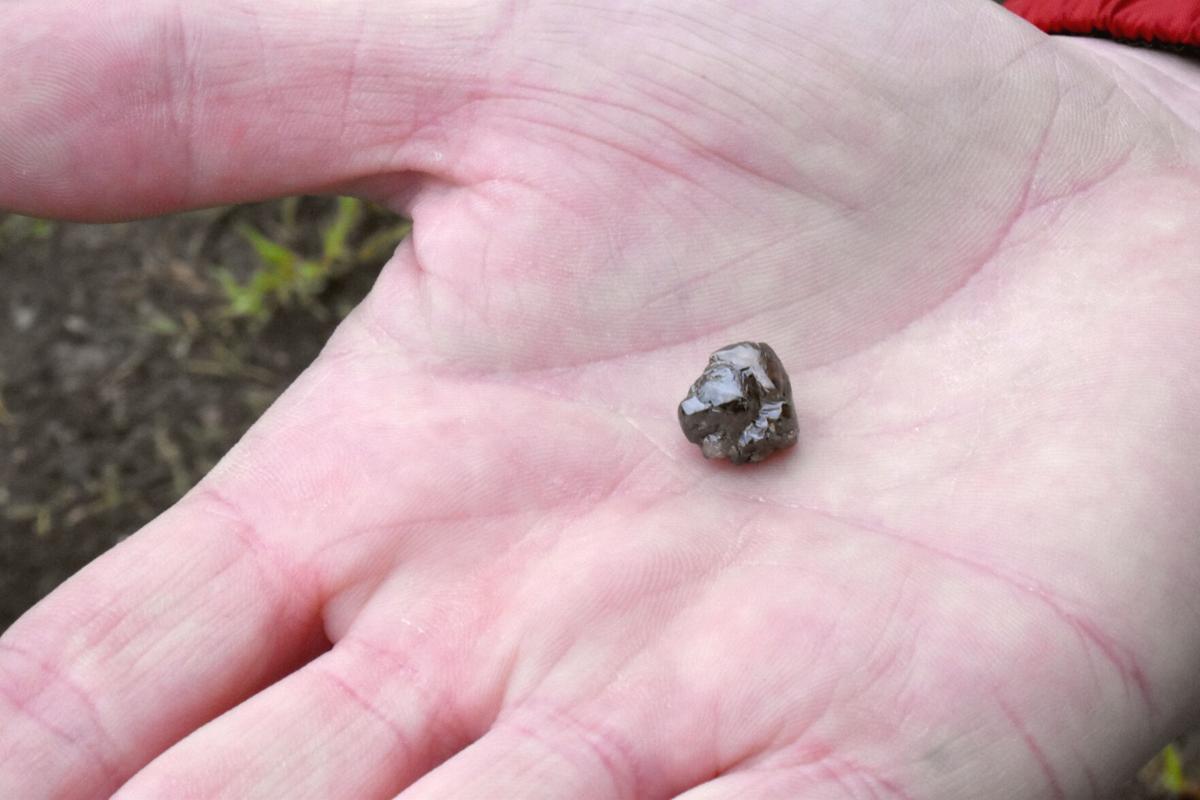 Kevin Kinard and the 9.07-carat diamond he found at Crater of Diamonds State Park.

Kevin Kinard, 33, a bank branch manager from Maumelle, visited the Arkansas Crater of Diamonds State Park on Labor Day and found the second-largest diamond found in the park’s history.

The park near Murfreesboro made the announcement on Wednesday.

Kinard has visited the Crater of Diamonds fairly regularly since first going there on a second-grade field trip, despite having never found a diamond. This trip was to turn out differently.

Kinard and his friends brought equipment with them to wet sift, but Kinard preferred surface searching. “I only wet sifted for about 10 minutes before I started walking up and down the plowed rows. Anything that looked like a crystal, I picked it up and put it in my bag.”

While searching in the southeast portion of the diamond search area, Kinard picked up a marble-sized crystal that had a rounded, dimpled shape. He said, “It kind of looked interesting and shiny, so I put it in my bag and kept searching. I just thought it might’ve been glass.”

The plowed soil of the park’s 37.5-acre diamond search area was fairly dry on Labor Day Monday, with temperatures in the low 90s. A few clouds provided occasional relief from the sun.

After a few hours of searching, Kinard and his friends stopped by the park’s Diamond Discovery Center, where park staff identifies visitor finds and register diamonds.

Kinard said, “I almost didn’t have them check my finds, because I didn’t think I had found anything. My friend had hers checked, though, so I went ahead and had them check mine, too.”

An employee identified Kinard’s rocks and minerals but sat his rounded, dimpled find aside to carry into the office for closer examination. After a few minutes, park managers brought Kinard into the office and revealed that he had discovered a

diamond weighing more than nine carats. “I honestly teared up when they told me. I was in complete shock!”

“Congratulations to Mr. Kinard on finding this impressive diamond – the second largest found at the park since 1972,” said Stacy Hurst, secretary of the Arkansas Department of Parks, Heritage and Tourism. “A find like this is always thrilling for the park guest, as well as the park staff, who get to help identify the gem and share in the excitement.”

Weighing 9.07 carats, Kinard’s diamond is the second-largest found at the park since the Crater of Diamonds became an Arkansas state park in 1972. The only larger diamond found during that time is the 16.37-carat white Amarillo Starlight, discovered in August 1975.

Park Superintendent Caleb Howell said, “I always love to see the reactions and excitement of our visitors when they find large diamonds. When I met Mr. Kinard, it was immediately evident that he was shocked and speechless.”

After registering his diamond, Kinard took it home and spent a couple of weeks mentally processing his excitement. He returned to the park on Wednesday to share his story.

According to Assistant Superintendent Dru Edmonds, “Mr. Kinard’s diamond is very large, with a brandy brown color. It has a rounded, dewdrop shape and a metallic shine typical of all Crater diamonds.”

“Conditions in the diamond search area were perfect for Mr. Kinard to find his diamond. Park staff plowed the search area on August 20, just a few days before Tropical Storm Laura dropped more than two inches of rain in the park. The sun was out when Mr. Kinard visited, and he walked just the right path to notice the sunlight reflecting off his diamond.”

Kinard also noted the significance of the date he found his diamond. “It weighs 9.07, and I found it on 9/7. I thought that was so unique!”

Finders of large Crater diamonds often name their gems. Kinard chose to honor his friends with the name of his diamond, calling it the Kinard Friendship Diamond. “We love to travel together and had such a great time out here. It was a very humbling experience.”

Kinard said, “Have the park staff check everything, because you never know. I would have never in a million years dreamed that I had found anything. Always have them check it!”

As of this publication, 246 diamonds have been registered at Crater of Diamonds State Park in 2020, weighing a total of 59.25 carats. An average of one to two diamonds are found by park visitors each day.

Diamonds come in all colors of the rainbow. The three colors found at Crater of Diamonds State Park are white, brown, and yellow, in that order.

The previous record for the second-largest diamond found at the park belongs to the 8.81-carat white Star of Shreveport, discovered in 1981 by Carroll Blankenship, of Shreveport, LA.

Dr. David Ashby: No one defects to North Korea for its economic prowess

Magnolia School District pays tribute to its principals and assistants

Oshsner LSU will test for virus in Cullen