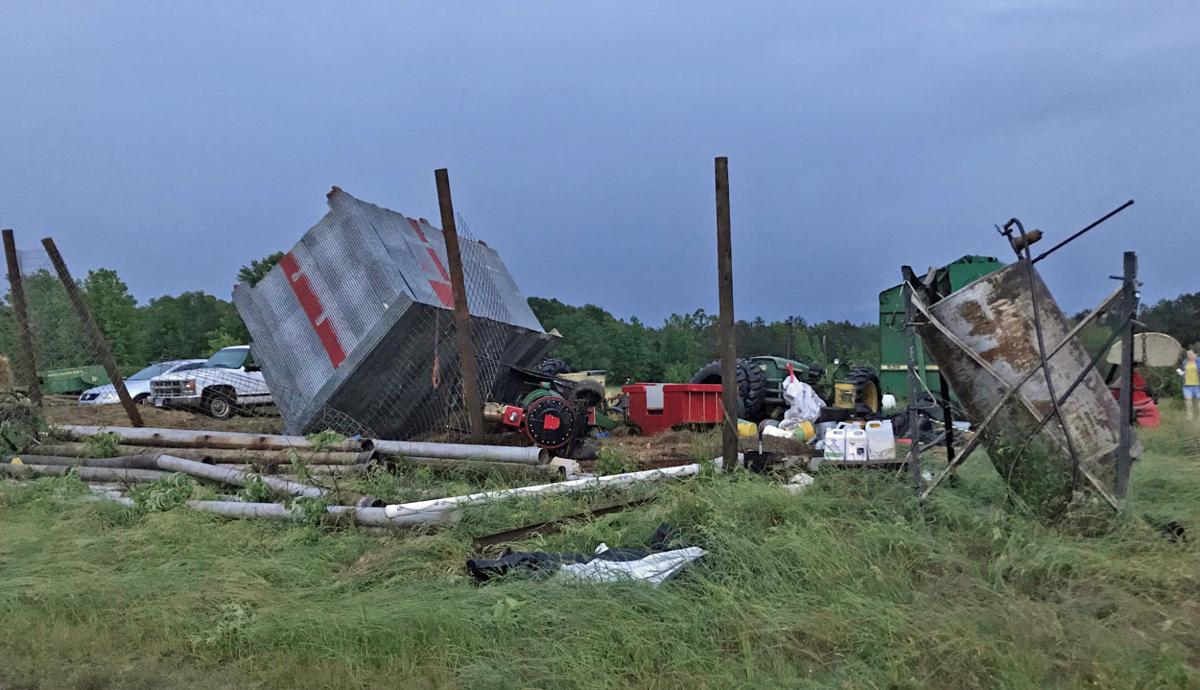 An equipment barn at Miracle Farms near Bodcaw was damaged during a storm on Saturday.

A storm destroyed a barn in the Bodcaw community of southern Nevada County on Saturday.

An equipment barn at Miracle Farms near Bodcaw was damaged during a storm on Saturday.

A storm destroyed a barn in the Bodcaw community of southern Nevada County on Saturday.

A car was overturned and a tree was uprooted at the David and Kadie Randolph residence in the Bethel community near Lamartine, northwest of Waldo.

The roof was ripped off an equipment barn at Miracle Farms, 659 Nevada 15, near Bodcaw. Miracle Farms, owned by Jack and Sunny Daniels, is a market farm that sells processed livestock and other agricultural products to the public.

The damage in those communities took place about 6 p.m.

Columbia County was under two different tornado warnings due to thunderstorms capable of producing tornadoes.

The first warning was issued by the National Weather Service in Shreveport at 4:43 p.m. for central and western Columbia County. The storm followed a tract from the south to the north-northwest, skirting Magnolia slightly to the west before entering southern Nevada County.

The second warning was issued at 5:16 p.m. for a storm in the Atlanta community, moving toward the north along Arkansas 98.

The weather service issued a warning at 5:58 p.m. for parts of Nevada and Hempstead counties due to the storm in the Bodcaw area.

No injuries were reported from the storm.

Brief power outages were reported. The largest was southeast of Magnolia.

magnoliareporter.com has recorded 2.38 inches of rain since Friday. The total for the month of May is 3.54 inches and 32.52 inches since January 1.

Columbia County and much of South Arkansas is under a flash flood watch until 7 a.m. Sunday due to a low-pressure system that has clouds orbiting over South Arkansas and North Louisiana. One to three additional inches of rain is possible during the overnight hours.

Operators at Remmel Dam on the Ouachita River at Hot Springs reported at 11:04 p.m. on the release of elevated levels of water from the dam.

“This is a routine high-water event which will result in lowland flooding along the Ouachita River in Hot Spring County,” the National Weather Service in Little Rock said in a special statement.

“The current flow rate from Remmel Dam at 11:04 p.m. is 34.5 thousand cubic feet per second. Initial impacts from Remmel Dam releases will reach the bridge on Interstate 30 near Malvern within 1 to 2 hours, with maximum impacts occurring within the next 2 to 3 hours.

“Livestock and property should be moved out of the floodplain. Flooded roadways should be avoided.”

Shackelford with Peoples Bank for 30 years