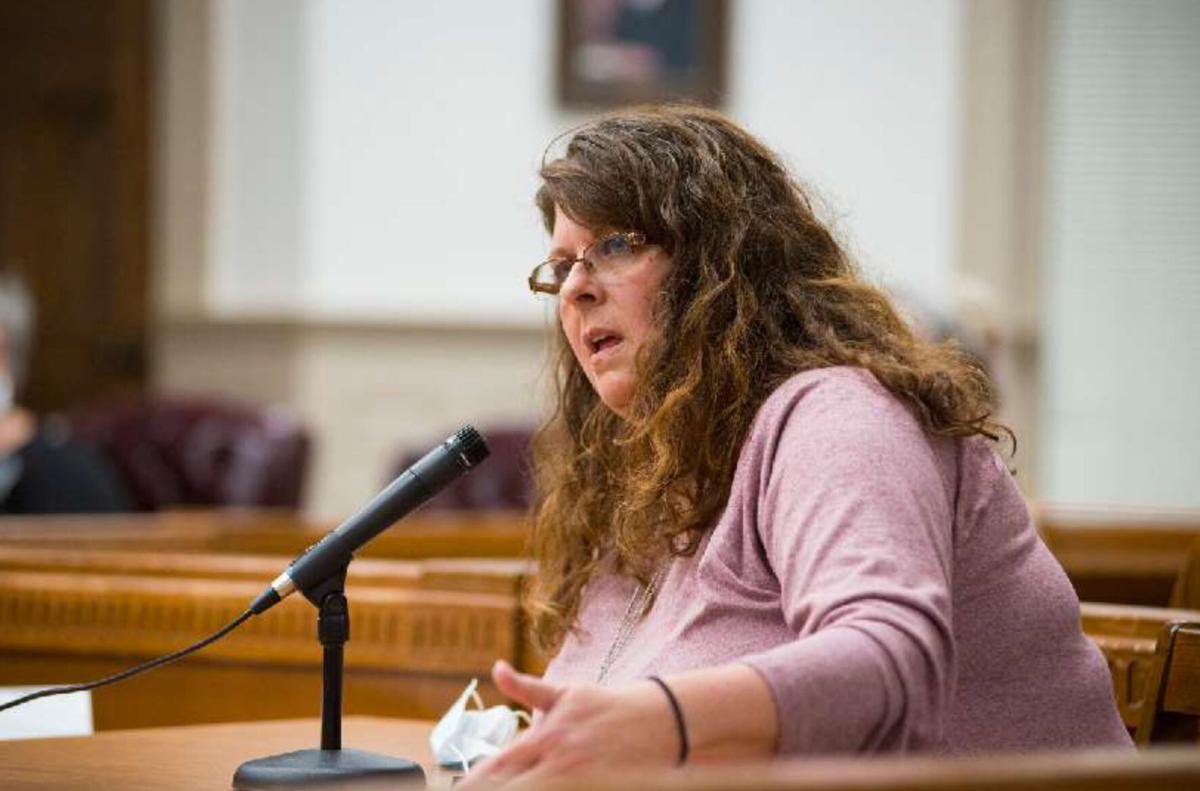 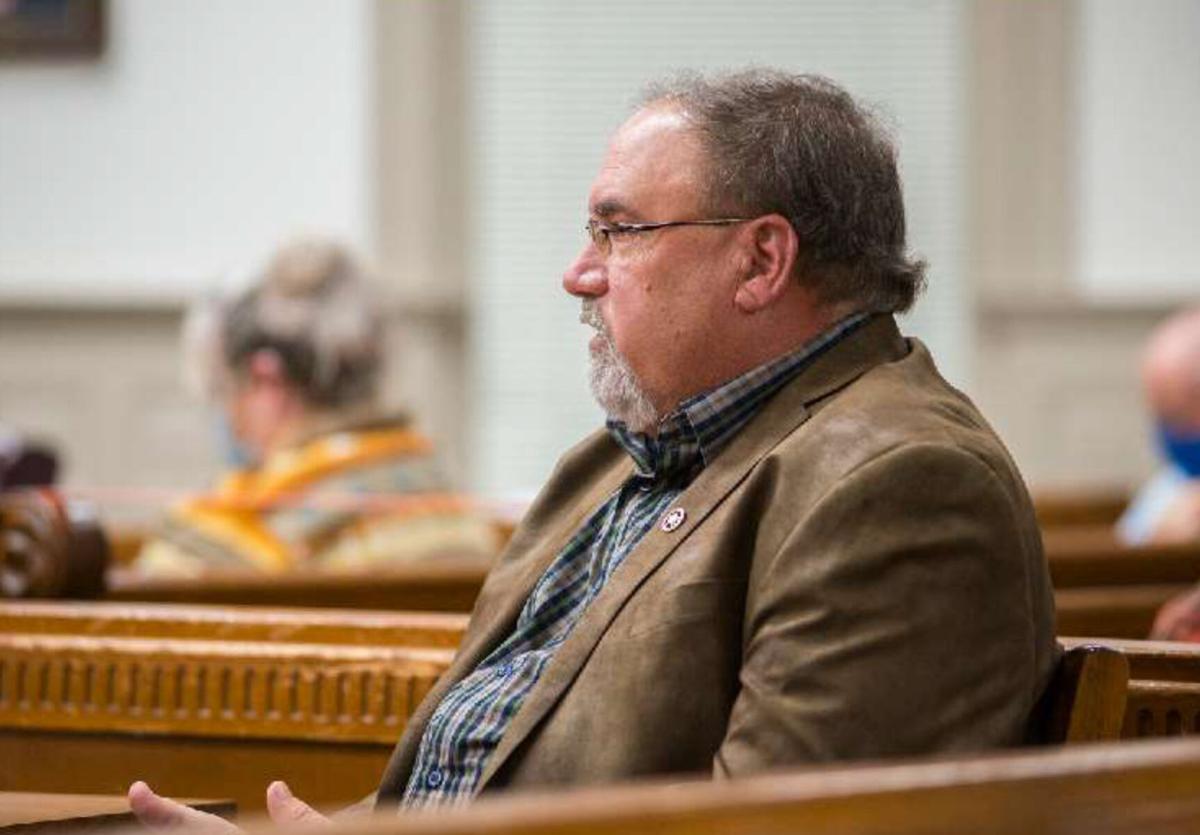 John Dyson, supervisor of the Columbia County Landfill, listens Monday night to an employee he fired in November.

John Dyson, supervisor of the Columbia County Landfill, listens Monday night to an employee he fired in November.

Dixon was a longtime former office employee at the county landfill and felt, according to her testimony, that the termination was unjust and a violation of her constitutional rights to free speech.

The Quorum Court, however, after witness testimony from both Dixon and Dyson, as well as another Columbia County landfill employee who witnessed the termination incident last year, ultimately voted 9-0 that Dixon’s firing did not violate the county’s termination policy.

JPs Penny Cook, Annette Pate, Jason Ray, Lynn Story, Oliver Thomas, Burnie Sharp, Rick Waller, and newly sworn-in District 6 JP Greg Sanders, all voted in unison on the matter, while JP Terry Williams abstained from voting. Sam Sharp, who was recently sworn-in as the Justice of the Peace for District 2, taking the place of former longtime JP Marjie Blair, was not present at the meeting, nor was JP Russell Thomas.

The vote was public and took place immediately following the witness testimony. The court deemed that no executive session was needed to privately discuss the matter in more detail before voting.

The state of Arkansas is an “at-will” state, meaning employees can be terminated without cause. If a public employee alleges he or she was fired on a discriminatory basis (age, gender, national origin, race, creed, etc.) and violated the Columbia County employment policy, then a public grievance hearing can be held to determine whether the firing was within the scope of the rules.

Dyson stated during his testimony that Dixon was fired for insubordination and overall hostile actions that culminated in a November 18, 2020, verbal altercation at the Columbia County Landfill offices.

Dixon claimed that she was fired over questioning her supervisor on coronavirus office quarantine protocols.

Caleb Baumgardner, an El Dorado-based private attorney, represented Dixon during the hearing and led the questioning on her behalf. Columbia County Attorney Becky Jones led the questioning for the county. Quorum Court members were also allowed to interject with questions during the witness portion of the hearing. All witnesses testified under oath.

Dixon was the first witness to take the stand Monday night. Baumgardner began by asking her a series of questions that laid out why she requested the grievance hearing and why she felt her firing violated the county’s termination policy.

The Macedonia community resident had been employed at the Columbia County Solid Waste Department as an office manager and gate attendant for the Columbia County Landfill for nearly 10 years before her termination on November 18, 2020. She said Monday that she hoped to regain her old position at the landfill office, along with all of her accrued benefits.

When asked if she wanted Dyson to be reprimanded for his alleged actions, she said instead that she hoped he would receive “coaching” on how to better deal with employee pandemic issues. Dyson stated during his testimony on Monday that he had no problems with Dixon’s actual job performance, but that her multiple “explosions” over time and her insubordination during last year’s verbal spat were the ultimate cause of the firing.

In her testimony, Dixon said she felt Dyson did not properly handle an in-office quarantine situation after multiple employees came in “close contact” on November 11, 2020, with an employee that later tested positive for COVID-19. She alleged that workers that had been off for contact tracing were coming back into the office after only a few days away from work and that she wanted answers to why this was happening.

“To me, I was questioning to John (Dyson), ‘why are you sending them home, and then letting them come back?’” she said Monday during her testimony. “I questioned him about that, and he got upset with me,” she said.

Dixon said that she further questioned why Dyson was allowing employees to come and go from work if they had been in “close contact” with someone who tested positive for coronavirus.

Dixon later said that, after telling her to “go home” three times and she refused, her supervisor then informed her that she was fired.

Dixon also testified that two virus protocol meetings had been held at the office on her days off, and did not know what was said there.

“They had a meeting with all of the employees on (November 13, 2020), but I happened to be off,” she said. “They also had another meeting on (November 17) about COVID-related issues, but I was not aware of these because I was off.”

Dixon noted that on November 18, 2020, she continued to ask about discussions held at the meetings, and why Dyson was allowing employees to come back and forth to work.

“To me, I don’t think he was taking our lives as seriously as I think he should be,” she added. “… So, I just questioned him on it, and he got mad, then he fired me.”

Dixon said she stayed at the landfill office for another hour or so, then Dyson called the Columbia County Sheriff's Office to escort her off the property.

She later said she felt her constitutional rights to free speech had been violated and that she wished to contest her recent termination.

Dixon during testimony also played a recording of portions of the November 18, 2020, incident. Dyson later testified that he had no knowledge she was taping the conversation. Dixon said she secretly taped the incident “for my own safety.”

In the recording, Dixon could be heard questioning Dyson, then raising her tone of voice to him. Dyson became agitated and retorted: “Brenda, go home. Just go on home.”

The exchange continued, with Dyson telling Dixon multiple times to “go home,” to which Dixon continually answered, “no.”

After another bit of exchange between the two parties, Dyson said, “You’re fired.”

In reply to the firing, Dixon yelled, “OK, John, you want that? Boy, are you going to be sorry!”

As the recording continued, things settled. Dyson told Dixon that he would tell her everything about the virus protocol meetings, “If you’ll let me.”

Dixon later apologized and the conversation calmed down even more. The former landfill employee could be heard saying “I’m just concerned” to her former supervisor.

The conversion was, at times, difficult to follow, but Dyson after the apology said, “I’m just following (OEM) guidelines” and that employees that had been exposed were “beyond CDC guidelines” for quarantine. He was also heard counting 14 days for one employee who never came down with coronavirus.

After a few more minutes of calm discussion between the two, the recording finished. In total, it was around 15 minutes of conversation.

In his final questioning, Baumgardner asked if Dixon felt she was wrongfully terminated for “engaging in constitutionally protected speech.”

In her cross-examination of Dixon, County Attorney Jones asked pointed questions about the former employee’s specific job duties and whether they included questioning her supervisor. She also asked if Dixon was the party who initiated the November 18, 2020, and asked if she understood the meaning of being an “at-will” employee, to which Dixon replied, “Yes.”

“I’m not perfect,” Dixon added, “And I know my tone of voice is not always what it should be, but I was curious as to why he was asking me to go home.”

Dixon did not dispute the claim and admitted that she would not leave the office that day upon her supervisor’s request. She also again added that she was confused by his line of questioning.

In her final set of questions, Jones asked Dixon if she had ever been disciplined before her firing late last year. She replied that she was “written up” after a 2016 incident and agreed that she probably let her emotions “get the better of her” in that instance.

After Dixon’s witness statements, her former supervisor was called to the stand. In his testimony, Dyson said that Dixon came to the office on November 18, 2020, and seemed “agitated” and felt that “it was only a matter of time” before a verbal altercation occurred.

When the topic of coronavirus came up, according to Dyson, the conversation devolved into the explosive argument heard in the recording. The landfill supervisor added that Dixon was also “totally uncontrollable” and would not listen to anything he had to say and that she was not able to be reasoned with.

“I tried to attempt to diffuse the situation three different times,” he said. “And she said, ‘no.’”

Dyson also claimed that, after telling Dixon she was fired, she slammed both hands on his desk and encroached into his personal space with a harsh message for him, before pacing back and forth in the office.

“She came across my desk, slammed her hands, and got six inches away from my face and said, ‘you’ll be sorry,” said the landfill supervisor.

Another employee in the office witnessed the incident and attempted to calm Dixon down, according to Dyson.

He noted that Dixon’s demeanor, attitude, insubordination, and detrimental conduct all lead to her termination and that there had been incidents in the past similar to the November 18 argument that were “too many to count.”

The 2016 written reprimand, according to Dyson, was due to the same types of conduct. The landfill supervisor also claimed that another written reprimand occurred in 2018 over “aggression to other employees” that Dixon refused to sign.

“It’s been an ongoing problem -- the blow-ups, as I call them,” said Dyson.

The supervisor noted that fellow employees have also had problems with Dixon, but he said he would “rather not answer” how they felt about her.

Jones asked Dyson if the coronavirus subject matter of the discussion on November 18, 2020, had anything to do with Dixon’s firing, to which he responded, “No, it did not.”

The final witness testimony on Monday came from current landfill employee Ron Atkins. The 9 1/2-year county worker in his statements said that he had seen Dixon be “confrontative” at times and “get a little testy,” and be “very irate” but that she was never “out of control.”

In his short testimony, Atkins said that, at one point on November 18, 2020, he told Dixon to “chill” when she was highly agitated. He also witnessed Dyson tell her multiple times to “go home” and that she said “no” when told to do so.

“She got up close to the desk, she put her hands on the desk, and she leaned over and she was talking right to him,” said Atkins.

Atkins said during his cross-examination from Baumgardner that Dixon also had taken care of him three years ago when he was sick and that she visited him multiple times while he was in the hospital.

When all testimony on Monday was completed, the Quorum Court declined the need to deliberate on what they had just witnessed. The roll call vote and the “no” votes came swiftly after the county’s governing body found that Dixon’s firing did not violate the county’s employment termination policy. A simple majority was all that was required for the motion to pass.

After the vote, the grievance hearing was adjourned.