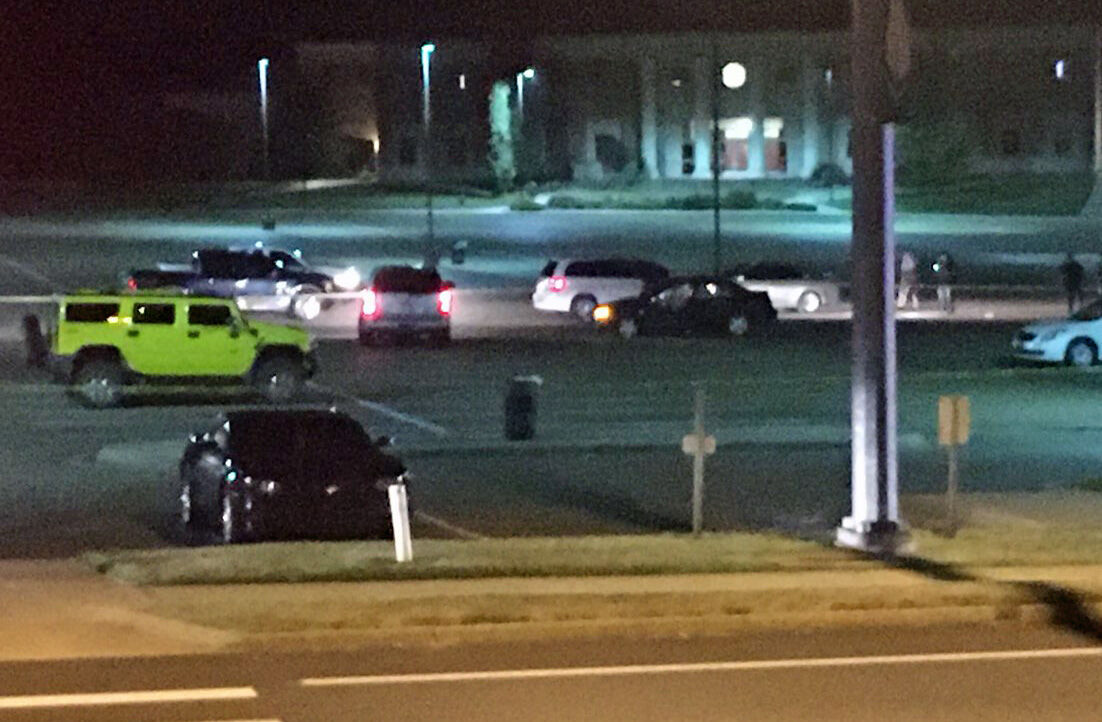 Police vehicles surround a dark-colored car in which a deceased person was found early Tuesday at Southern Arkansas University.

Magnolia Police block access to the parking lot across the street from the Reynolds Center at Southern Arkansas University for a death investigation.

Police vehicles surround a dark-colored car in which a deceased person was found early Tuesday at Southern Arkansas University.

Magnolia Police block access to the parking lot across the street from the Reynolds Center at Southern Arkansas University for a death investigation.

A Southern Arkansas University student was shot to death and another was wounded early Tuesday in a parking lot at the campus in Magnolia.

The university has issued statements about the shooting through email and its Facebook page.

An email from SAU President Dr. Trey Berry called the shooting a “tragic, isolated incident” that is being investigated by SAU and Magnolia police, and the Arkansas State Police.

“At approximately 12:31 a.m., the University Police Department reported three students who live off-campus came onto campus and met individuals not believed to be associated with the institution in the parking lot of the Donald W. Reynolds Campus Community Center. After a brief encounter, shots were fired. SAU engineering student Joshua Keshun Smith lost his life during the incident, and another student was transported by ambulance to the Magnolia Regional Medical Center and is in stable condition,” Berry’s statement said.

“This incident was not random, and at no time were other students, faculty, or staff endangered,” Berry said.

“Our thoughts and prayers are with Josh’s family as we mourn the loss of his life, and we pray for our other students involved in this devastating event. The safety of our campus family is always our primary concern. Counseling services are available through the SAU Counseling Center for SAU students, faculty, and staff by contacting 870-235-4911.

“We appreciate the work of law enforcement officials who were able to quickly determine that this isolated act poses no broader threat to our campus community. Anyone who believes they have additional information about this incident is urged to contact University Police at 870-235-4100,” the statement concluded.

The name of the wounded student was not released. There was no immediate word on the status of the third SAU student in the parking lot.

There was also no information on the number of non-students involved, how many of them were armed, and the number of shots fired. No arrest has been reported.

In the hours immediately after the shooting, Magnolia Police Department investigators and SAU officers combed the area around a small four-door, dark-colored sedan parked almost squarely in the center of the large parking lot across North Washington Street from the Reynolds Campus and Community Center. One shooting victim was inside the vehicle.

Investigators took photographs and made notes at the shooting scene. An initial police line around the vehicle was soon enlarged to include the entire parking lot, but was reopened shortly before students began arriving for the first day of the fall semester.

Due to the time of the incident, the parking lot was largely vacant except for a cluster of vehicles near North Washington Street, across the street from the Talley Hall residential dormitory.

The shooting is believed to be the first on-campus homicide in the history of the 111-year-old university. SAU historian Dr. James Willis told magnoliareporter.com that many years ago, a student died in an accidental shooting, but there has never been a reported homicide.

Tuesday’s death brought to mind an off-campus shooting that happened at the former Veterans of Foreign Wars post in Magnolia on August 24, 2014. Two people, including an SAU football player, were shot and killed during a party prior to the start of the school year. One man was sentenced to 30 years in prison on a charge of second-degree murder in connection with the crime.

In Columbia County this year, there has been one murder-suicide and one justifiable homicide. There were three homicides in the county during 2019.

Railroad has plan to build new bridge over Dorcheat Bayou

Market on the Rails will be Saturday evening, with fireworks to follow

Powerball rolls over to $22 million