Ruth Della Sumlin was convicted of a 1977 homicide. 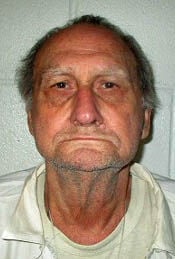 Harold Sherman Upton, 78, is the current oldest and longest-serving Columbia County man in state custody. He was convicted of first-degree murder for a 1971 homicide that he committed when he was 28.

Ruth Della Sumlin was convicted of a 1977 homicide.

Harold Sherman Upton, 78, is the current oldest and longest-serving Columbia County man in state custody. He was convicted of first-degree murder for a 1971 homicide that he committed when he was 28.

Ruth Della Sumlin’s latest request for a commutation of her life sentence for capital murder in Columbia County was declared “without merit” this month by the Arkansas Parole Board.

The news about Sumlin came in the Arkansas Parole Board’s monthly recommendations for pardons and sentence commutations.

Sumlin has been in jail or prison for almost 44 years. On Thanksgiving night 1977, she surprised a guard at the old Columbia County Jail and held a gun and knife on him, and demanded that the guard release the man she had married in jail a month earlier, Warren Sumlin. Warren Sumlin and four other prisoners escaped. Two of the escapees were soon recaptured, but Sumlin and two other inmates, along with Ruth Della Sumlin, fled in a vehicle that belonged to a man named J.Y. Cooper.

The Sumlins and one of the other inmates were captured by Dallas County authorities the next day. The fifth escapee was caught a few months later in another state. Testimony indicated that the Sumlins shot at and intended to kill the two other inmates sharing their ride so that they could steal their money and possessions.

Also the next day, Cooper’s near-naked body was found on a logging road near Magnolia. He had been shot once and his sexual organs were mutilated. The state alleged that Ruth Della Sumlin had killed Cooper and stolen his car to facilitate the escape. She testified that Cooper was in the car when she took it to the jail, and that her husband killed Cooper later. The other inmates in the car testified that Cooper was not present when they escaped.

Warren Sumlin was also convicted of capital murder. He died in prison.

Sumlin is both the oldest and longest-serving Columbia County female in state custody.

The current oldest and longest-serving Columbia County man in state custody is Harold Sherman Upton, 78, who is held at the Ouachita River Correctional Unit in Malvern. He was convicted of first degree murder on March 6, 1974.

Upton was found guilty of the December 27, 1971 shooting death of Woodrow Defee. Upton and his wife picked up Defee on a highway in Union County. A short time later, Upton stopped the car, tried to rob Defee and then shot him twice – leaving the body near the road.

In Arkansas, the Parole Board has the authority to assist the governor in exercising his authority to grant pardons and commutations.

A commutation is a reduction in a sentence imposed by a court. It may mean either a lesser term of imprisonment, or reduces a sentence to time served.

A pardon is an act of forgiveness issued by the governor for a crime that has been committed. It may be issued to people either in or out of prison.