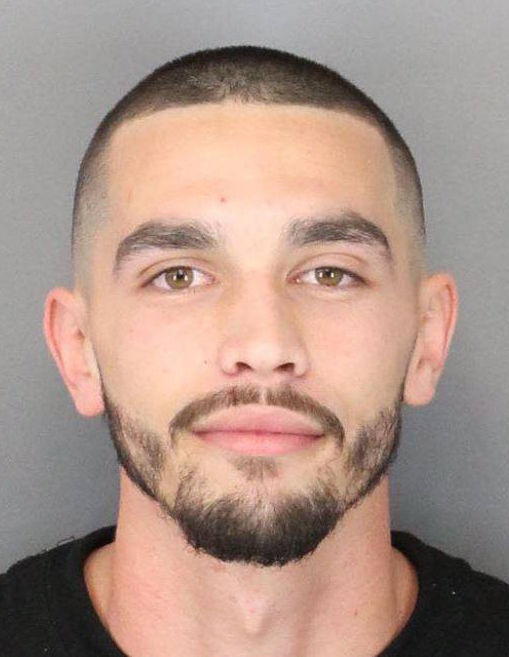 Damien Andrew Wolfson, 25, is charged with aggravated assault, possession of a controlled substance-methamphetamine with purpose of delivery, fleeing and simultaneous possession of drugs and firearms.

Nicholas Payne Wolfson, 20, is charged with possession of a firearm by certain persons.

Damien Andrew Wolfson, 25, is charged with aggravated assault, possession of a controlled substance-methamphetamine with purpose of delivery, fleeing and simultaneous possession of drugs and firearms.

Nicholas Payne Wolfson, 20, is charged with possession of a firearm by certain persons.

Two California brothers are in custody following a wild series of events Friday in Magnolia, which included the ramming of a city police car and a manhunt that lasted most of the day.

Damien Andrew Wolfson, 25, and Nicholas Payne Wolfson, 20, both of Manteca, CA, were taken early Saturday to the Columbia Count Justice and Detention Facility after they were captured in Texarkana.

Damien Woofson is charged with aggravated assault, possession of a controlled substance-methamphetamine with purpose of delivery, fleeing and simultaneous possession of drugs and firearms.

Nicholas Wolfson is charged with possession of a firearm by certain persons.

Men who fled the area after running from a deputy sheriff and ramming a Magnolia police car are in custody in Texarkana.

Both men have criminal records. They were arrested as the result of a March 2018 incident in Manteca. They were two of four men who were charged with shooting at five people who were inside a parked car. Three of the four – including two children – were wounded, Loe said. The California charges included conspiracy to commit a crime and attempted willful murder.

Loe said that shortly after noon, a Columbia County deputy sheriff attempted to stop a vehicle in the South Height Street area.

The vehicle refused to stop. Magnolia police joined in a pursuit. The vehicle driven by Damien Wolfson hit a Magnolia Police Department car that tried to block him on South Height Street, squeezing past and fleeing northbound. The Wolfson vehicle soon wrecked.

Details as to what happened immediately after the Wolfson vehicle hit the Magnolia police car are vague.

Loe said that at least one man bailed out of the car before it wrecked, with the second suspect fleeing into woods immediately after the wreck.

Information was developed that the two men ended up hitching a ride to Texarkana, where they were apprehended.

Sheriff Loe said that firearms were found in the vehicle that lawmen seized.

Magnolia Police Chief Todd Dew said the officer with whom Wolfson collided was not hurt. The police vehicle was heavily damaged but could be driven.

It was unclear why the Wolfson brothers were not in California custody.

Loe said lawmen have no idea why the Wolfsons would be in Columbia County – halfway across the country from Manteca, CA. Manteca is in San Joaquin County, east of the San Francisco-Oakland metropolitan area.

KZHE-FM contributed to this story. KZHE-FM is the radio news partner of magnoliareporter.com . CLICK HERE to see the KZHE website.

No drawdown at Lake Chicot in 2020

2020 Dr. King Day will be commemorated on Monday

Governor names De Queen banker to SAU Board of Trustees

LifeShare has blood drive in Stamps today, Magnolia on Friday

Do you feel safe from violence in your own home?