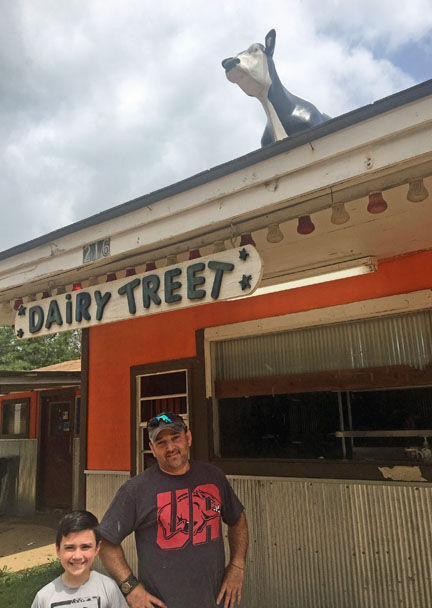 Jeff McClure, whose family had made a name for itself in the local hamburger trade, has taken ownership of the Dairy Treet and has been working to get the building back ready to open in Waldo. He stands with his youngest child, Jack, 9. 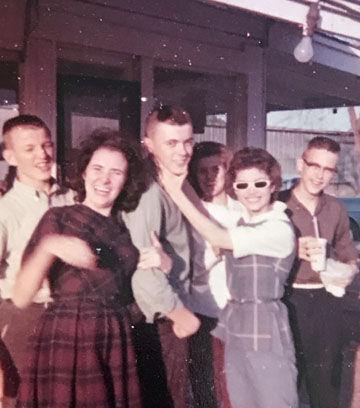 A group of 1965 graduates from Waldo High School stand in front of the modern day Dairy Treet. The hamburger stand has been a part of Waldo since the 1950s and is known by the iconic dairy cow that stands on top of it. Some people used to call the place “The Cow” because of the cow that watches over customers from the roof.

Jeff McClure, whose family had made a name for itself in the local hamburger trade, has taken ownership of the Dairy Treet and has been working to get the building back ready to open in Waldo. He stands with his youngest child, Jack, 9.

A group of 1965 graduates from Waldo High School stand in front of the modern day Dairy Treet. The hamburger stand has been a part of Waldo since the 1950s and is known by the iconic dairy cow that stands on top of it. Some people used to call the place “The Cow” because of the cow that watches over customers from the roof.

A family tradition of fresh, made-to-order hamburgers, fries and soft serve ice cream will continue in Waldo as the Dairy Treet takes on new ownership.

Jeff McClure bought the Dairy Treet recently and hopes to have it open for business by August 1.

Jeff McClure is the brother of Jason McClure. Jason McClure owns both Wade’s Burgers & Fries locations on both ends of Main Street in Magnolia.

“I thought about calling it Wade’s but it has been the Dairy Treet forever in Waldo and I’m going to leave it like that,” he said.

He is keeping the non-standard spelling of Dairy Treet -- two E’s again -- thus sticking with what is already known and not making a change to a burger stand that has been built on tradition.

And yes, the dairy cow reproduction that’s made the Dairy Treet a Waldo landmark will remain. The Waldo icon has stood watch over the business on West McKissack Street since the 1950s.

McClure did decide to paint the cow, known to many folks as “Elsie,” black and white. She was formerly in brown and white livery. McClure will give the entire building a black-and-white spotted cow pattern. He said this will give the building a neater appearance.

The Dairy Treet was vacant for less than a month when McClure snapped it up.

“I caught it early before someone else got it,” McClure said.

As a chemical operator at Albermarle Corporation, McClure said he works on reconstructing the Dairy Treet on his days off and hopes that business will one day do well enough that it will be his only job.

McClure comes from a family with a long history in the restaurant business. His father, Wade McClure, opened both locations of Wade’s Hamburgers & Fries in Magnolia before eventually getting out of the business and handing those locations over to Jason McClure, Jeff McClure’s brother.

Wade McClure passed away recently and will not get to see the Dairy Treet reopen, but Jeff McClure said his father -- whose picture remains as a memorial to him at Wade’s -- would have been proud.

McClure said his entire family has long been in the burger business. His mother worked at the Dairy Treet when she was a teenager in Waldo and all his aunts and cousins worked there as well. That was one of the reasons he could not stand to see such a landmark in Waldo sitting there vacant.

McClure grew up working at his father’s burger restaurants since he was 14. He said there were locations in Waldo, Magnolia, Stamps and even one in Bernice, LA, a small town near Monroe.

“I guess it just comes naturally to me,” he said.

But when he graduated from Waldo High School, he said he looked around and noticed some of the elderly people in his hometown had never left before. He wanted to go see what was out there. So, he moved to the Dallas/Fort Worth area where his mother lived for 12 years and became a manager for Whataburger.

He said that experience was valuable but running his own restaurant will be much better.

McClure said the Dairy Treet menu would be like the one known “since the beginning of time,” and will be like the Wade’s Burger fresh patties that are smashed out by hand each day.

“Fresh every day, not frozen. That’s the secret there with just salt and pepper, that’s it,” he said.

Donna Hinshaw is a long-time fan of Wade’s and the Dairy Treet. She said she remembers some menu offerings of the 1980s that were among her top picks at the Dairy Treet.

“Growing up, the pizza burgers and pizza sticks were my favorites,” she said. “The patty would have pizza flavor with cheese on it and toppings just like hamburgers. I hope Jeff is able to bring it back like it used to be and I’m sure he will.”

Another reason to be excited about the Dairy Treet’s return is the soft serve ice cream that is hard to find, she said. When she was growing up, her grandpa used to take her to either Dairy Treet or Jimmy’s in Stamps for some of the best ice cream, she said.

Because the Dairy Treet has a cow up on the roof, many people just simply referred to it as “The Cow,” she said.

Stanley Neill, 71, McClure’s uncle, said he remembers how the cow originally got named and that was because Elsie and Earl Rowe originally opened the hamburger stand. He said it was the hot spot for all of Waldo, employing many teenagers who would come after school to make some money.

“They ran that thing for 35 or 40 years. You would call ahead, and they had some of the best food,” Neill said. “They always had really good foot-long hot dogs with chili, good hamburgers and french fries and the milk shakes were a quarter back then.”

Neill’s son, Jeremy Neill, said the taste of Wade’s hamburgers has garnered attention from time-to-time, including a recent feature by a Shreveport television station. The best thing about the food at Wade’s and the soon to be Dairy Treet is that it is not fast food, Jeremy Neill said.

“It’s made after you order it. That’s the difference in their food. It’s not sitting under a heat lamp,” he said.

His favorite burger is a cheeseburger with pepper jack cheese and jalapenos. Other favorites are the patty melt and the double patty melt.

“It’s going to be a good for Waldo, it’s like a cornerstone that has been here for years,” said Jennifer Burton, water clerk at Waldo City Hall.

Several members of the Waldo High School page on Facebook said it is difficult to talk about the Dairy Treet and not tell stories about how many times the cow was taken off its roof and later returned.

Janet Taylor, who worked there right after high school in 1978, said she had always heard the story about older guys taking the cow down off the roof as a prank.

“I don’t remember their names and they probably don’t want their names given but I know how mischievous the kids are and these were high school boys,” she said. “There was a pasture across the way called the Elkins farm I believe. I guess in the middle of the night they Ms. Elsie’s cow and put it in the pasture. Ms. Elsie was upset wondering where the cow and when they found it was right across the pasture.”

Another member of the Waldo High School on Facebook, David Baird, said there are earlier accounts of the cow being stolen and relocated.

“It was taken off the roof and placed among the herd of dairy cattle across Highway 98. It had to be 1968 or 1969,” he said. “I was 13 or 14 at the time. The cow was painted brown like the jersey cows across the highway. It was placed next to a feeder. The police looked for two weeks and never noticed one cow standing statuesque. I dropped a hint and the cow was spotted. Though I did not take it down, I helped place it back on the roof.”

People can look forward to the eventual return of gasoline pumps and a little store where hot foods to go will be sold, as well as other items typically found at a convenience store.