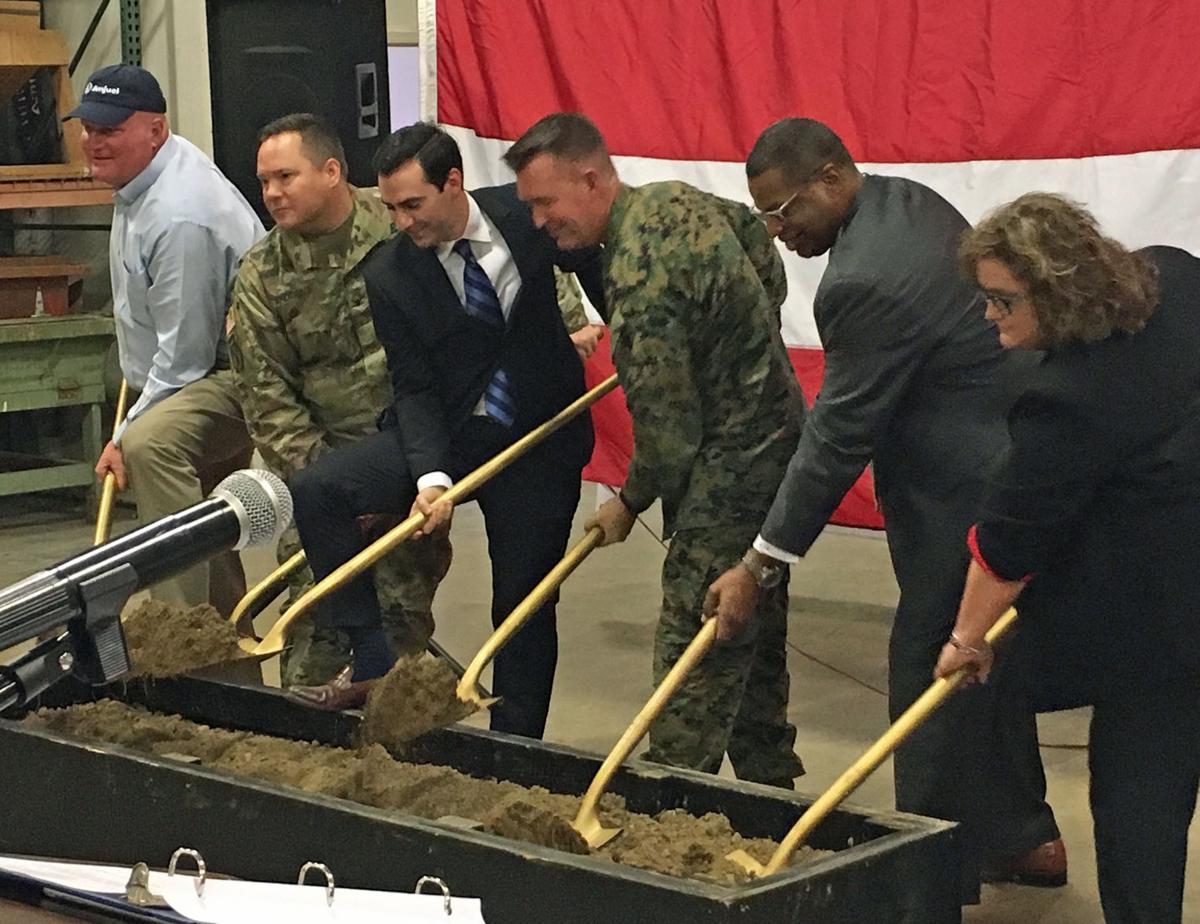 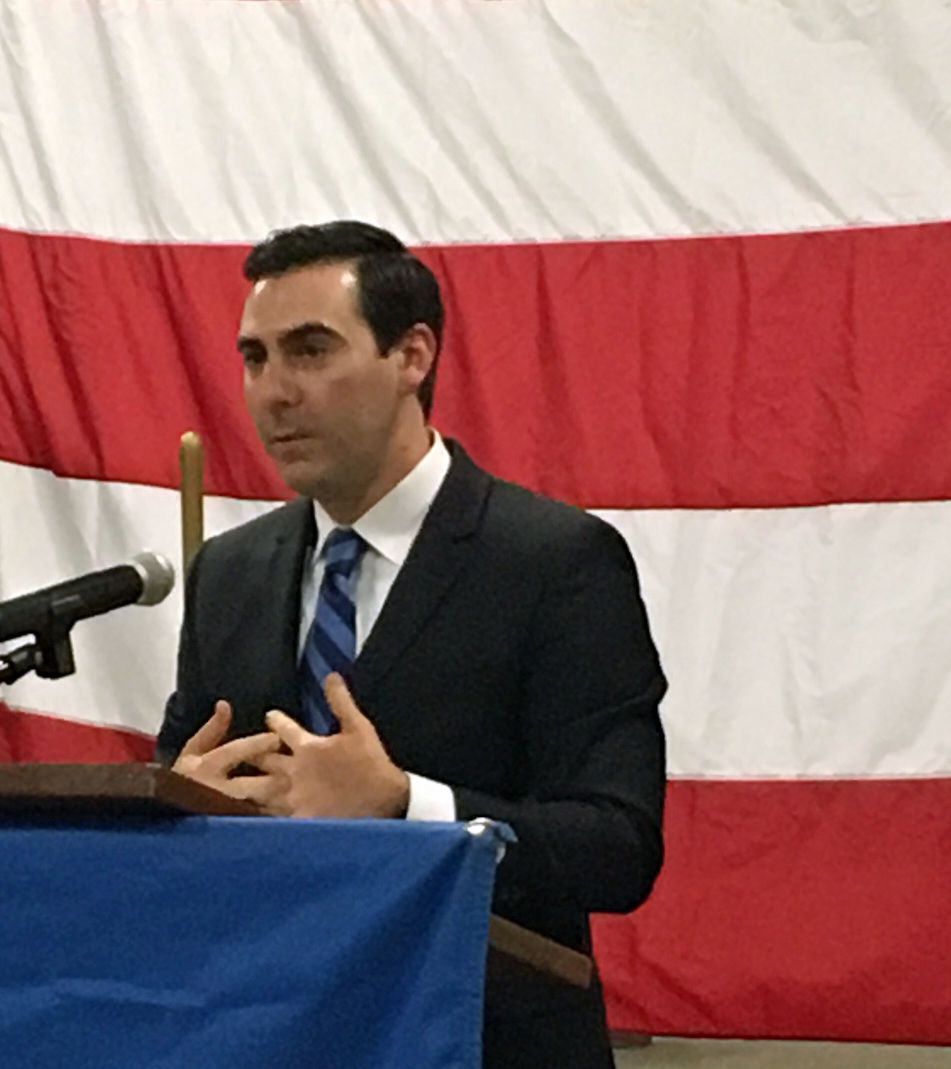 Construction of new spray rooms at Amfuel will speed production and raise the quality of fuel cells produced for military aircraft.

That was the message heard by Amfuel employees and invited guests Monday morning during a symbolic groundbreaking at the company’s massive facility off North Vine Street in Magnolia.

Amfuel officials and representatives from the Defense Contract Management Agency, with Mayor Parnell Vann, took part in the event.

The spray room addition will be built on the southeast corner of the building, near North Vine.

“When we build our fuel cells, this is a critical step in our manufacturing process. This spray room will have a temperature- and humidity-controlled environment to ensure the quality,” said Faith Elliott, vice president of Production for Amfuel.

A lack of environmental controls has made the existing spray room one of Amfuel’s largest operational challenges, she said.

“Amfuel will be able to build a higher-quality product faster,” Elliott said.

The project is a partnership with the City of Magnolia and the Department of Defense, Elliott said.

Mayor Vann noted that Amfuel has had a succession of owners during his 11 years in office. The current ownership team has brought Amfuel out of bankruptcy.

“These owners – this management team – the city had faith to put money in Amfuel. You have our confidence. We know that the jobs that you do matter to our community,” Vann said.

The company has rehired many former employees who were let go under previous ownership, Vann said.

More than 300 people currently work at Amfuel. Employment had fallen to 70 shortly after a previous ownership group announced plans -- which were never carried out -- to transfer much of the operation to Wichita Falls, TX.

The council approved a $150,000 grant request from Amfuel to help pay for infrastructure work as part of the project. Amfuel will invest more than $200,000, and the Department of Defense is contributing another $2 million.

The spray rooms will be DOD property and are considered necessary to help Amfuel fulfill existing military contracts for fuel cells. Baker told the council in October that once the contract is fulfilled, Amfuel and the DOD will make arrangements to allow the spray rooms to be used for other contracts of military importance.

Anderson said that people such as himself, and Amfuel’s management team, are easy to replace. But he looked at the large assembly of Amfuel employees and said they are not replaceable.

“Your collective knowledge and expertise and attention to detail are invaluable. Your job is messy. But it contributes directly to our national defense and our national security,” Anderson said.

“Your efforts are known and are very much appreciated,” he said.

Elliott thanked the next speaker, Col. Victor Argobright, for arranging a visit to Magnolia last week by a U.S. Army helicopter gunship. Amfuel employees were able to see the example of how their fuel cells are used.

Col. Argobright, commander of DCMA’s office at Bell Helicopter in Dallas, said he has flown Cobra gunships for more than 20 years, and other aircraft with Amfuel fuel cells for even longer.

“What you do here on a daily basis is important,” Agrobright said. Military aircraft with Amfuel cells are flown around the world.

Fuel cells have been a readiness issue for H-1 helicopters for the past two years. As recently as eight months ago, a fourth of the H-1 fleet was down because of fuel cell issues.

Amfuel has recently cut the number of back orders for fuel cells in half, Agrobright said.

Rodney Mayo, deputy commander of DCMA in Dallas, said the agency is building a tighter relationship with Amfuel. It has assigned a person who will be on site daily.

“Your labor builds heroes. You are heroes,” Mayo said.

“Amfuel has re-invented itself and is expanding its ability to meet warfighter needs all over the globe. Your selfless service and attention to detail is appreciated by soldiers, sailors, airmen and Marines.

Michael Accordino, Amfuel president, said that the company recently celebrated a year under its new ownership.

“Amfuel is stabilizing. Its ownership is proactive and not reactive. You put it all together and you have an Amfuel that is strong, profitable and will be in Magnolia for years to come,” Accordino said.

Which team will win the 2020 Super Bowl?