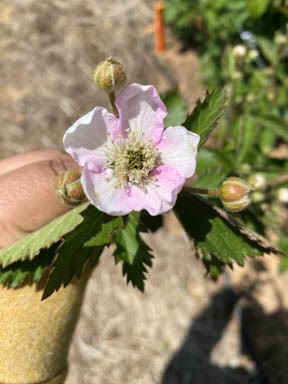 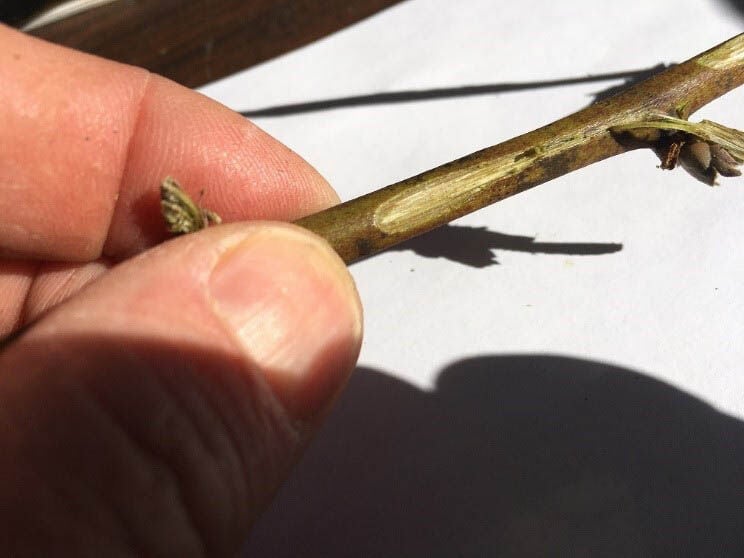 Blackberry cane injury as the result of winter weather.

Blackberry cane injury as the result of winter weather.

In the late winter and spring of 2021 we experienced two severe cold events in Arkansas that had the potential to impact fruit crops. The first event was arctic air that moved into the state during the week of February 14, when low temperatures of to -20℉ to 0℉ occurred on February 16.

After the February event we observed symptoms of cold injury and potential crop loss to peaches, blueberry and blackberry across the state. This was a major cold event for us in Arkansas with low temperatures 10-15° F below the low temperatures that are typical for our area and many parts of the state experienced 200+ continuous hours at temperatures below freezing which increases the likelihood for damage.

Unfortunately crops whose floral buds survived the February freeze, were then blooming or setting small fruit during a frost event on April 20-21, where temperatures dipped into the mid to low 20s F (Table 1).

Major crop reductions to peaches and muscadine occurred in Arkansas during the 2021 season due to these events. Muscadine vines were killed back to the ground in part of the state and fruit loads on peaches in many parts of the state were drastically reduced. Surprisingly blackberry crops in many parts of the state were near normal levels despite the extreme temperatures observed. Blackberry cane damage is expected to occur once temperatures dip below around 0-10F and blooms are damaged below around 27F.

The conditions we experienced in 2021 were expected to result in major reductions in blackberry yields at our University of Arkansas Fruit Research Station, Clarksville (FRS) where lows in February achieved -15F and lows in April were 28-30F, however we still had decent crop yields at this location and in locations with similar conditions. Why?

In some cases growers using the rotating cross arm trellis were able to lay the trellis down and cover the plants during both cold events and were able to save the crop where growers using traditional static trellising had more significant crop loss.

Substantial cane damage was expected at -15F, potentially with canes of most cultivars killed to the ground. It was difficult to believe the lack of cane damage, and for most cultivars, bud damage, after this event. It is believed that a key reason the damage was not worse was the plants had not lost hardiness from their mid-winter hardiness levels. In the South, cold damage to blackberries and other crops is often due to fluctuating temperatures resulting in hardiness loss.

For the week prior to the -15F event, 6 of 7 days had highs in the 30s or below, with night temperatures from mid 20s to teens. This likely prepared the blackberries for this unusual event. Another factor could have been plant health. At FRS, there are multiple plots for many cultivars, and these plots have varying levels of care (weed and pest control, irrigation, etc.). In general, where the overall care and health of the plants was not as high, there was more winter cane damage. This should be noted since good planting management has many benefits, including potentially higher winter hardiness level.

In other cases we observed major differences in crop loss among cultivars. Following the February freeze we saw high rates (>60%) of cold injury in primary buds of Prime-Ark Freedom and moderate levels (20-40%) of injury to Natchez, and only very minor damage to Ponca and Ouachita. Cane injury externally and internally was observed on some cultivars but not uniformly. This shows up as withering of the cane on the outside or darkening of the internal portion of the cane just below the surface of the bark. More extreme cold injury was observed in less protected locations or low areas of poor cold drainage.

Following this event we saw mostly normal leaf out and flowering at FRS. Some growers at colder locations experienced uneven budbreak and reduced flowering. However, following the April frost growers reported losses of 50-100% to primary buds for certain cultivars and open blooms in the central and northern parts of the state. These observations reinforce the importance of planting multiple cultivars that have different bloom and ripening periods.

Secondary buds usually have a much longer flower cluster/shoot length, and often have fewer flowers per cluster than the normal primary buds. However, secondary buds usually have many large leaves, and produce very good quality berries that ripen later than the primary crop. This year provided a good opportunity to observe secondary bud crop potential, and cultivars or advanced breeding selections varied significantly in this characteristic.

Another potentially important component of yield of blackberries, particularly for local-market growers, is basal buds or inflorescences which emerge from the crown of the plant. Many have seen these produced on the older variety Navaho, which tends to produce basal inflorescences commonly, and more so if winter injury to buds occurs on the upper-portion of the plant canopy.

This year there was a significant amount of basal inflorescences produced on some blackberries. These berries also ripen later and are often very large and of high quality due to the large leaves produced.

A very close look was provided this year among the more important Arkansas varieties, those established in the market or being planted for the first time. Ouachita, the most widely planted Arkansas variety, did not show any obvious cane or bud damage from the February freeze. It was not in bloom on the April 21 frost, but had many large, unopen and exposed flower buds. It was estimated to have 10-20% crop reduction due to bud damage. This was very surprising due to Ouachita is one of the most reliable producers due to later bud break than Natchez or Osage. And, normally this level of bud damage would not be expected at 29-30F that was recorded at the site.

Natchez appeared to have some bud damage from the February extreme temperature, and some flower clusters were reduced in number of flowers present (evidence of winter damage), thus Natchez started out the bloom period reduced in crop potential. It was in bloom on the date of the frost, and experienced devastating damage to open flowers and buds. Crop was estimated to be 1% after the frost. Interestingly, Natchez produced a noteworthy number of secondary buds along with some basal inflorescences, and was estimated to have a 5-10% crop due to these later-developing buds. The berries produced were large and of exceptional quality.

Osage did not show any cane or bud injury following the February extreme, and was in early bloom at the time of frost, slightly behind Natchez in degree of bloom. It was estimated to have 85% crop reduction due to damage to open flowers and developing buds. Osage produced very few secondary or basal inflorescences.

The newer cultivars Ponca and Caddo had some of their first experiences with cold damage in these challenging events. Ponca ripens early, near or with Natchez, but blooms 8 days after Natchez and 4 days after Osage. Ponca was noted to have a slight amount of damage to buds after the February freeze and some frost damage to exposed flower buds at frost (bloom had not begun), resulting in an estimated 10-20% crop reduction and thought to be a little more damaged than Ouachita. However, Ponca has a number of secondary buds usually, and these broke as expected.

Ponca also produced a substantial basal inflorescence crop, and this was more than observed prior. When the year was complete, it appeared that Ponca provided a full crop. Caddo was not observed to have freeze damage to canes or buds. It was not in bloom at the frost event but did incur damage to unopen buds and was estimated to have 10% crop reduction. Caddo also produced a number of basal inflorescences that had substantial yield potential that extended the fruiting season beyond that of Ouachita.

The primocane-fruiting cultivars suffered much more substantially than floricane-fruiters from the February freeze. A major impact on primocane fruiters and resulting freeze damage is the degree or amount of primocane fruit produced the prior fall. In the fall of 2020, a larger than normal primocane crop was produced at FRS, and this resulted in the canes naturally dying down to a point below the fruiting point.

The February freeze appeared to compound the degree of dieback on the canes, so that a major reduction in crop potential occurred. Prime-Ark® 45 had severe cane damage due to the winter freeze plus substantial frost damage resulting in an estimated 90% crop reduction. It produced a limited number of basal inflorescences along with limited secondary buds. However, it was observed in North Carolina, where the severe February freeze was avoided, but the April frost occurred, that Prime-Ark 45 produced a substantial secondary bud crop that extended ripening almost into the primocane production season.

Prime-Ark Traveler fared a little better than Prime-Ark 45 at FRS, but still was highly impacted by the winter freeze and spring frost. The damage to Prime-Ark Freedom was the greatest of all primocane fruiters, with winter freeze bud damage over 95% of the floricane crop. The new Prime-Ark Horizon fared better than other primocane fruiters as far as survival of canes in the February freeze, but with the combination of winter and frost freeze damage was estimated to have 75% crop reduction.

Powerball rolls over to $53 million

SAAC will stage "The Enchanted Bookshop"

Are you smarter than your parents?