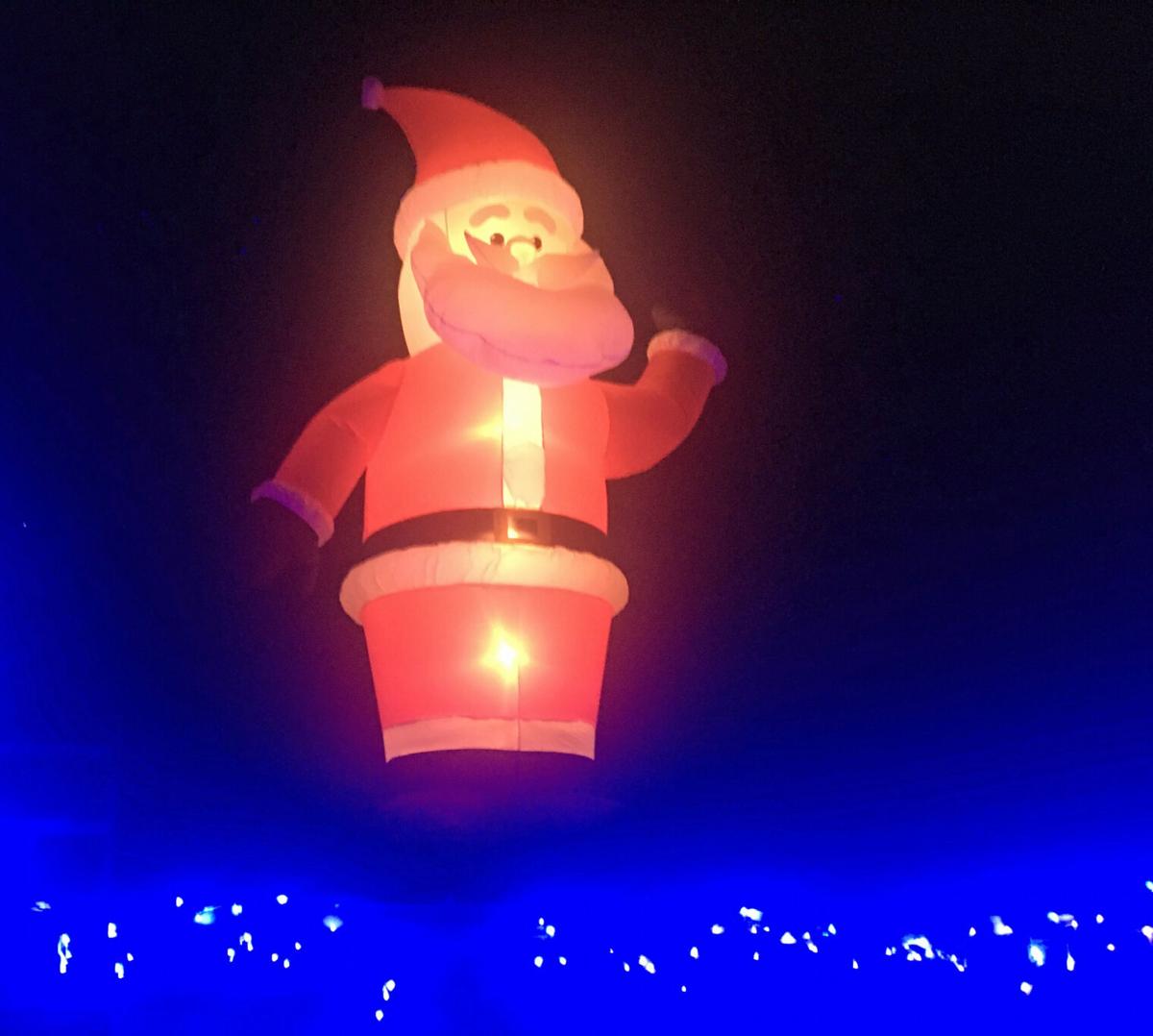 Santa Claus greets passers-by at the home of Montana and Ryan Ware on North Washington. 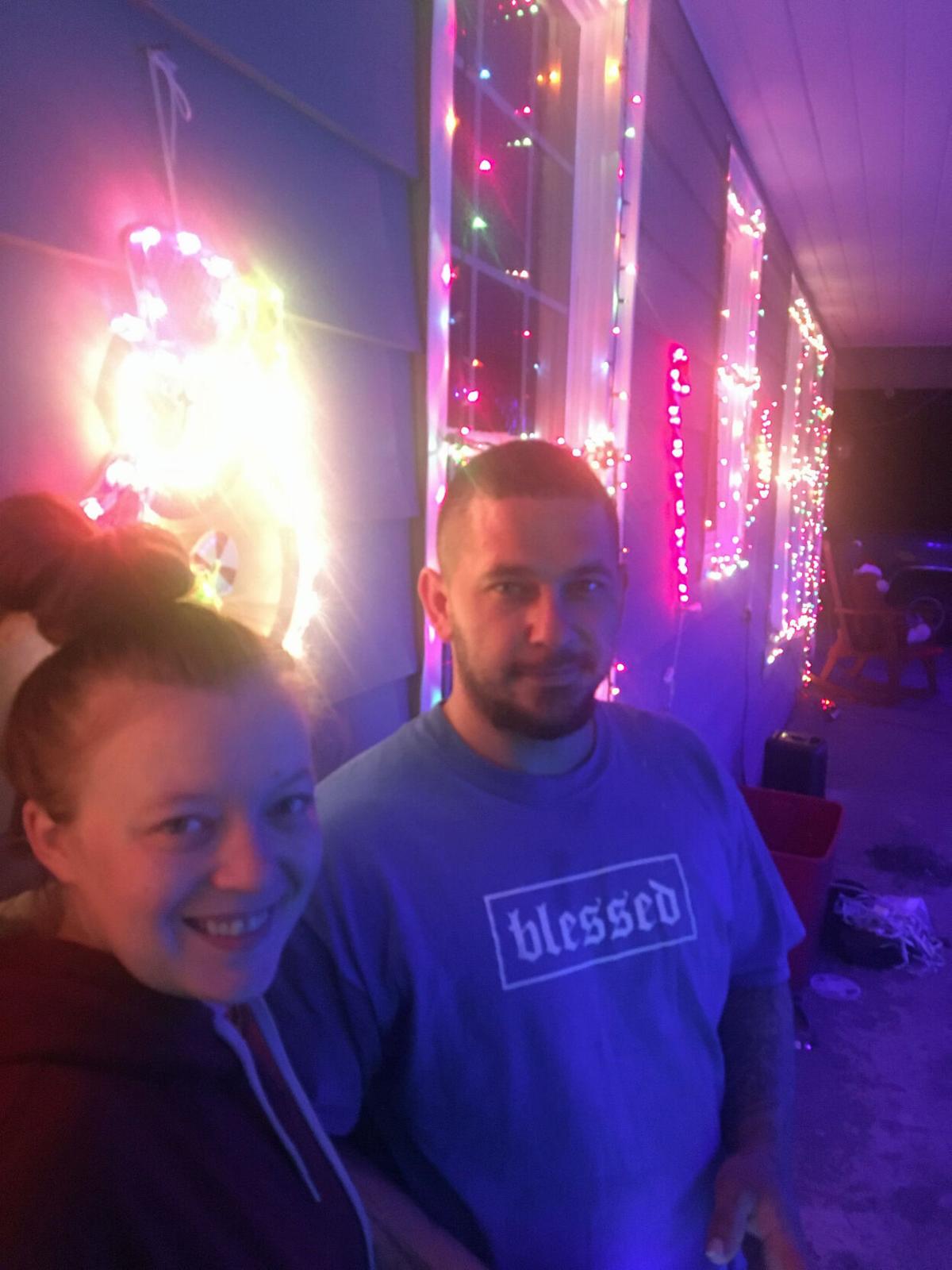 Montana and Ryan Ware outside their decorated home. 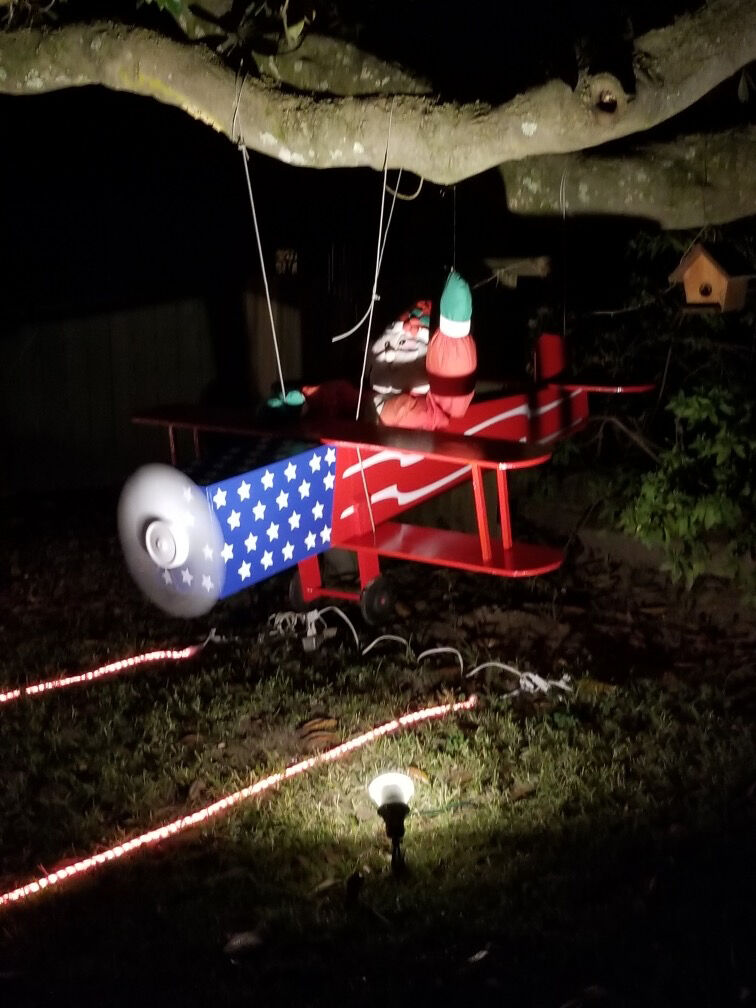 Santa Claus lands on the lawn of May and Lynn Wilson. 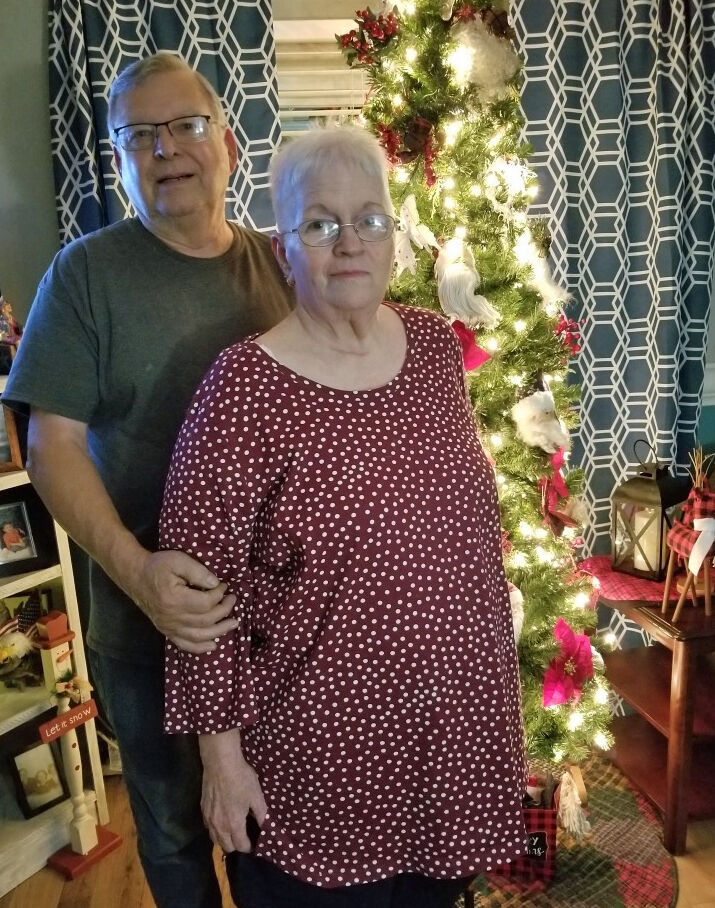 Lynn and Mary Wilson on North Washington Street wanted their Christmas decorations up before Thanksgiving so they could enjoy the holiday longer. 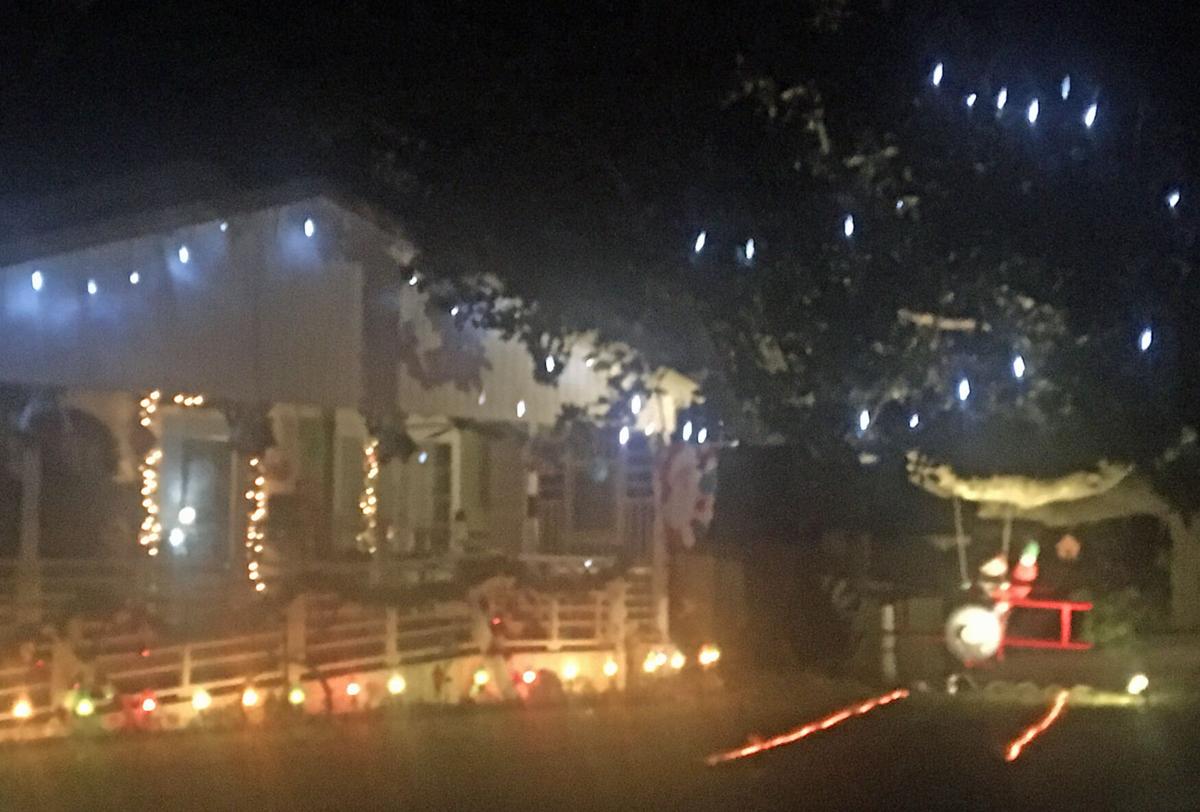 The front yard of Mary and Lynn Wilson.

Santa Claus greets passers-by at the home of Montana and Ryan Ware on North Washington.

Montana and Ryan Ware outside their decorated home.

Santa Claus lands on the lawn of May and Lynn Wilson.

Lynn and Mary Wilson on North Washington Street wanted their Christmas decorations up before Thanksgiving so they could enjoy the holiday longer.

The front yard of Mary and Lynn Wilson.

The song “We Need a Little Christmas,” seems to be coming to life as people have already begun putting up Christmas decorations before Thanksgiving.

Bleak news of 2020 has inspired them to put up their decorations to start celebrating early in a year that frankly could use a little more joy.

Nita Smith said she already has a tree she found in the attic of her new home up, but still needs to decorate it. She said she is going to have a couple of friends over this weekend to enjoy some eggnog and trimming the tree together. She also made ornament out of plywood and wrote Merry Christmas on it for her outside decorations. It is red and three feet across.

She made it ultra-holiday by adding glittery paint.

“It’s been a bad year and I think people are looking for a little something to pick them up,” she said. “I guess it gives people hope. The New Year is coming, and it will be a new year. People haven’t had anything to celebrate. This will probably be the first gathering for families for the whole year.”

Smith, a registered nurse, said despite the risks of getting COVID-19 by gathering for Christmas, expects people to gather anyway.

“I think people are pretty over it and tired of it,” she said.

Barbara Westbrook of Stamps said she hasn’t put up a large tree since 2016 when her mother passed away on Christmas morning. But in remembering her mother’s old saying, “Back your ears up and do it,” she is raising the tree this year.

“This year there has been so many bad things with the COVID and the riots and even though thankfully (the riots) are not happening here, I still think at Christmas everyone seems nicer and I thought we needed an early Christmas this year.”

Each year she decorates four-foot white trees. This year, she has decorated them all blue with an ornament to honor Amfuel, where she works.

In the past Westbrook would put up traditional ornaments on the large tree, but said she has to do something new this year because it can’t get the kind of tree she put up before her mother passed away.

“There are big balls of red, whites and green and blues and all stripes and a circle,” she said.

Along with the riots on television this year, she has also seen many friends and family turning against each other on Facebook. This is another reason to begin decorating and thinking about the season earlier, she said.

“The world needs a little more joy. People go out of their ways to help others on Christmas and that’s why I think we all need to start Christmas a little bit earlier,” she said. “If not by putting trees up, but at least in our spirits.”

Renita Smith, who manages Staci’s Cosmetics on the Magnolia Square, said one of the reasons she already has her tree up is that she and her new husband Shane have family coming in for Thanksgiving. Smith said she has always loved Christmas but this year everyone really needs Christmas.

“I thought this would bring a little cheer to the world if I got my tree put up instead of all this presidential mess and COVID, I just want to go home and look at something pretty when I get home. And there is not enough time to enjoy it if you put it up at Thanksgiving.”

Her tree has a Coca-Cola theme and is accentuated with some hoot owls, deer heads and snow men. It is wrapped in buffalo plaid ribbon.

“I just wanted something happy to think about instead of all the negative,” she said. “I don’t want to think about the politics, I’m so over that. We need to remember Jesus is the reason for the season.”

Montana and Ryan Ware who live across the street from Magnolia Regional Medical Center on North Jackson. They have put lights outside their home and Santa Claus and Snowman blow ups on the roof top. They are still adding lights.

“Last year I don’t think we did it this early, but Christmas is our favorite and the kids favorite and we need it this year,” Ware said. “2020 has been one for the books.”

Ryan Ware said Christmas allows everyone, even he and his wife, to be a kid again.

“The lights are neat and fun and it’s about the anticipation,” he said. “Everybody gets to be kids again especially the kids who have been quarantined and haven’t gotten to go anywhere. This is something that is going to be good for them to see.”

Mary and Lynn Wilson, who live on North Washington, are known for their seasonal yard decorations year round. Lynn Wilson is a carpenter and can build anything by sight, including Santa Claus in an airplane taking off from a lighted runway in their yard.

People drop by daily to ask Lynn Wilson about something in his yard and how he made it. There is a white snowman he made of three bicycle tires and bells he made out of flower pots put together. Another thing people like about the Wilson’s home is the snowfall lights which make it look like snow is falling.

This year the Wilson’s did decorate early because of the need for more cheer.

They put their decorations up two weeks before Thanksgiving because they did not want to have to put them up and then have to take them down again.

The Wilson’s Christmas tree is decorated with a Santa Claus theme and there are many Santa heads adorning the tree covered in white lights. The Santa Claus theme is a tradition started by her mother, she said.

“With everything that is going on, I thought it would be nice to have it up,” she said.