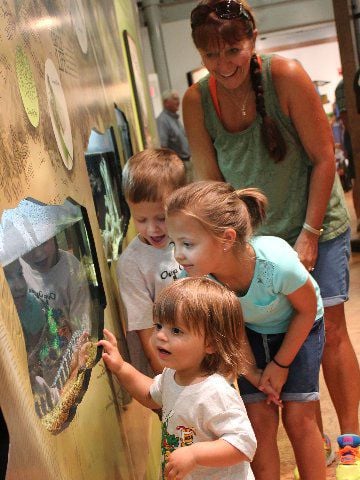 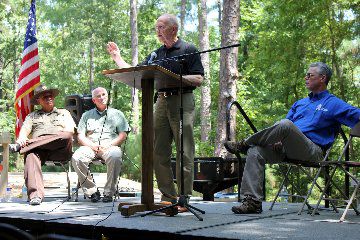 When it opened almost 40 years ago, Logoly was the state’s first environmental education state park. The new center was built in a manner to aid in that educational endeavor.

“The mission here is focused on interpreting the importance of the natural world and our place within it,” said Arkansas State Parks Director Grady Spann during a ceremony at the park’s pavilion prior to the ribbon cutting. “The new Visitor Center was designed and constructed with that emphasis in mind. It will have high impact on its guests and a low impact on its surroundings.”

The more than 7,100-square-foot facility features various exhibits such as aquariums, terrariums and a nature viewing area that acquaint the visitor with some of the animal life and plants of south Arkansas. One exhibit allows visitors to become familiar with the sounds of various birds, frogs and other creatures common to the area.

“We get thousands of kids coming here every year,” said Logoly Park Superintendent Jim Gann. “I’ve been here since the park opened in 1977 and I can tell you I’ve seen the impact that environmental education has on a young mind. It gives them an appetite for learning more and more about their natural surroundings and makes them want to protect it.”

The Visitor Center is also a registered project with the U.S. Green Building Council, and is being considered for the designation of a “LEED” building – Leadership in Energy and Environmental Design for New Construction Platinum Certification.

Solar panels on the roof will provide an estimated 21 percent of its energy needs. Additionally, the structure was modeled to produce a 39 percent reduction in baseline energy consumption. Rainwater harvesting and re-use via the use of capturing tanks will reduce potable water use an estimated 50 percent.

The center’s cost, including its exhibits, was just more than $4 million, paid for by an Arkansas Natural and Cultural Resources Council grant and the 1/8 cent Conservation sales tax.

During the dedication ceremony, Jim Dailey, chairman of the State Parks, Recreation and Travel Commission, admitted that though he was previously not very familiar with Logoly, he had been converted into an advocate. “Having been here now, seen the passion and its mission, I guarantee you it will be on the top list for me to recommend to people that they come and experience.”