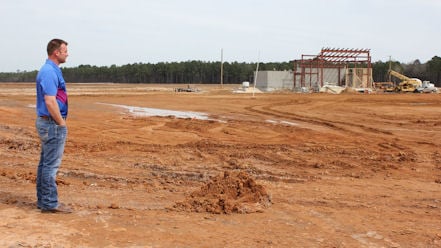 Jeff Drost, general manager of Muddy Bottoms ATV Park & Recreation Park south of Springhill, looks at the construction of the park’s outdoor theater, which when completed will have space for 18,000 people. 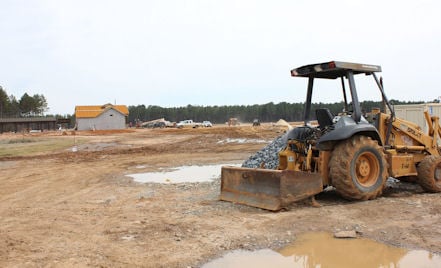 A full two months before the opening of the 5,000-acre Muddy Bottoms ATV & Recreation Park near Springhill, it has already become known as "Redneck Disneyland" for its promise of more than 100 miles in trails and facilities catering to off-road enthusiasts.

Jeff Drost, general manager of Muddy Bottoms ATV Park & Recreation Park south of Springhill, looks at the construction of the park’s outdoor theater, which when completed will have space for 18,000 people.

A full two months before the opening of the 5,000-acre Muddy Bottoms ATV & Recreation Park near Springhill, it has already become known as "Redneck Disneyland" for its promise of more than 100 miles in trails and facilities catering to off-road enthusiasts.

Fans of all-terrain vehicle trail riding and romping have reason to be excited. There’s a new ATV park under construction just south of Springhill, Louisiana.

It is mind-boggling huge.

Muddy Bottoms ATV & Recreation Park is being built on 5,000 acres -- roughly the equivalent of eight square miles -- in the bottomland of Bodcau Bayou, about five miles south of the state line with Arkansas. Of that total area, lakes make up about 1,400 acres.

When the park opens on Memorial Day weekend, there will already be more than 100 miles of riding trails. Within a year it’s expected to be double that.

The term “Redneck Disneyland” has been associated with the park, and indeed it’s a moniker with which Jeff Drost, the park’s general manager, seems very comfortable.

“That’s exactly what they’re calling it,” said Drost. “That’s the common theme that’s being said all over Facebook and the website. Redneck Disneyland.”

The name “Muddy Bottoms” is also appropriate. At the site, a vast area of cleared land is bustling with equipment and possibly as many as 200 construction workers, as buildings, roads, parking lots, and other amenities arise, literally up from the mud, in an effort to have the park ready by the grand opening.

Muddy Bottoms is the dream of the Madden family of Minden, Louisiana, owners of Madden Contracting Company. The family, consisting of brothers John, Doug and David Madden, purchased the property from International Paper Company about seven years ago, said Drost. “At that point it was just for timber. And then over time John got this big plan.”

“They kind of saw what all those had to offer, got things they liked and didn’t like about those places, put a thought in their head, and of course outdid everything they saw by a mile,” explained Drost. He gazes at the construction activity, then adds, “There’s nothing like this.”

Architectural drawings began about two years ago. Construction started last June. While ATV trail riding and competition are the park’s prominent features, Drost emphasizes it will be far more than just a place to bring a 4-wheeler. Musical entertainment will be a large part of the facility’s draw, and to accommodate it there’s a large amphitheatre under construction.

“We’re talking about putting 18,000 people in front of that stage, with huge, huge acts,” said Drost.

Concerts are planned at all of the mud riding events, of which five are planned for this year, and six in 2015. Additionally there will be one, possibly two, music festivals that will be separate from any ATV event.

Drost said the festivals will likely begin about noon and last until midnight, and will be a “bring your lawn chair,” type of event. There’s also discussion about holding a motorcycle event at the park, a “mini-Sturgis,” as Drost describes it, referring to the huge rally held in Sturgis, South Dakota, each August.

The park has also been in contact with the owners of the Chuck Wagon Races in Clinton, Arkansas, about possibly doing a similar event at Muddy Bottoms. “So we’ve got other ideas outside of the 4-wheeler industry that we’re going to try to get involved out here,” said Drost.

However, that doesn’t mean the park is short-changing the ATV fan. During the planning stage, Drost says the park made a major effort to anticipate the needs of the 4-wheeler crowd. When one drives up to the park, there will be five entrance lanes to accommodate the anticipated high volume of traffic. State-of-the-art technology will be used to get the visitors into the park as quickly as possible. Before leaving home, attendees can pre-pay online and print out a receipt. Once arriving at the park, the barcode on the receipt can be scanned, and entrance granted.

There will be a five-stall mechanic garage, complete with certified mechanics and spare parts. “If you get out here and break your bike, hopefully we’ll have the part you need and the mechanic to fix it,” said Drost, adding that the goal is to get the rider back on the trail as soon as possible.

While driving his pickup through the park, Drost points to an area off in the distance. “That’s going to be the 11-acre mud pit. It’s going to have islands in it, and deep spots and shallow spots, and that’ll be a big hang out are over there,” he said.

At the end of a day of mudding, it will be possible to pull up to a “drive-through buggy wash.” More than 200 pressure jets will clean both the ATV and the rider at the same time.

If a drive-through cleaning is not adequate, the park also will have a shower house. Though it will have no hot water heaters, that’s not a reason for concern because it will instead have its own boiler room. “We’ll never run out of hot water,” said Drost. The women’s shower rooms will have special amenities such as “a bunch of sinks and mirrors and plugs for hair dryers and all that kind of stuff,” he added. There will be a spray park for the youngsters, complete with water sprays from the ground, water guns, and buckets that fill up with water that can be emptied upon someone else, should that be desired.

At 9:30 p.m., the spray park will transform into an adult attraction called “The Wet Spot,” where a DJ will entertain.

A key ingredient of mud is water, but water is obviously also required for human consumption, so the park has drilled on site the largest water well in north Louisiana. A 170,000-gallon water tank and treatment plant is under construction adjacent to the well.

The excitement about the arrival of Muddy Bottoms extends beyond ATV enthusiasts, and includes even those with no desire to sit on a 4-wheeler. “We feel like it’s going to be just a really huge economic boost around here,” said Jessica Caraway, chamber manager for the Springhill – North Webster Chamber of Commerce. “It’s going to add employment to this area. It’s going to bring people in. It’s going to bring new industry in,” she added.

According to Drost, the park will hire approximately 80 to 100 part-time employees and about four full-time workers. Though the park itself will have a number of cabins, 184 RV sites and additional “primitive camping” areas, Caraway believes that’s unlikely to satisfy the total need for lodging. “When you have an event weekend that brings in up to 15,000 people, you’ve got to have a spot to put them. And I see it flowing to Minden, to Magnolia, and just building out,” she said.

Springhill currently has a couple of motels, neither of which is a national chain. It also has a few RV parks and bed and breakfast facilities.

The grand opening is scheduled for May 22-26 -- Memorial Day weekend.

The park’s entrance is off U.S. 371, five miles south of the Arkansas-Louisiana state line. Turn west onto George Taylor Road, and go another 1.3 miles to the visitors center entrance.

Plenty of hunting left to do this season

Murphy USA reports $61 million of net income during past quarter