Big Boy steam locomotive No. 4014 will travel through Southwest Arkansas on November 12-13, including an overnight stop at Prescott. 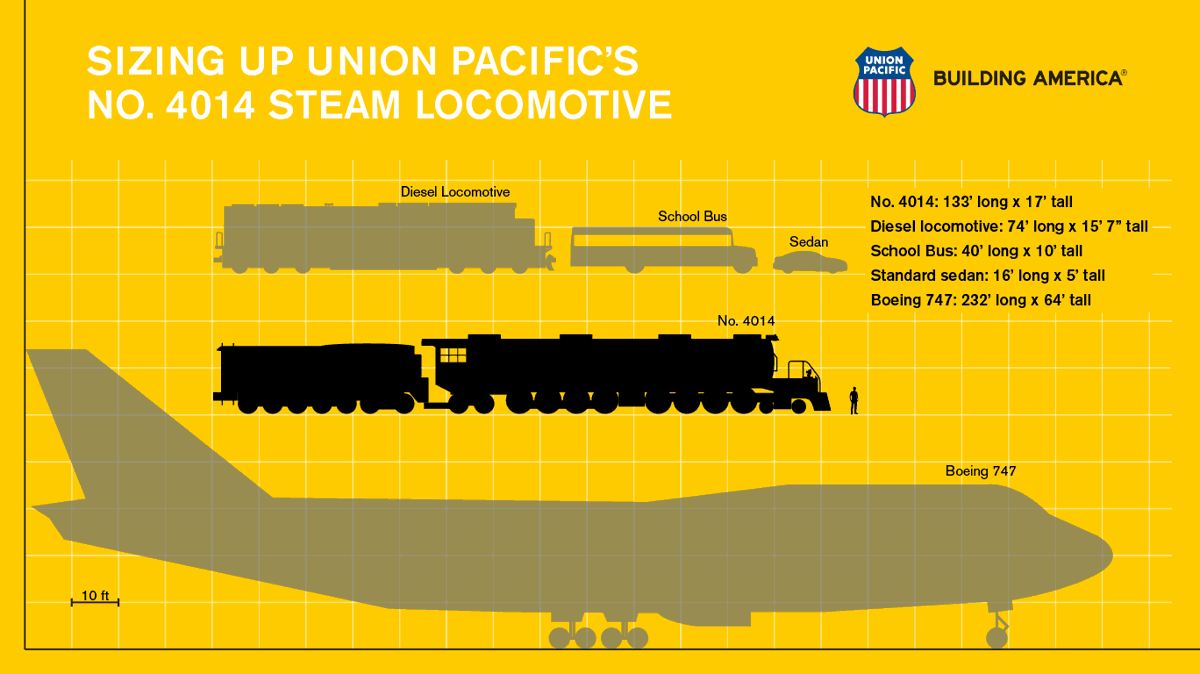 The Big Boy locomotive, with its coal car, is 132 feet long and weighs 1.2 million tons.

Big Boy steam locomotive No. 4014 will travel through Southwest Arkansas on November 12-13, including an overnight stop at Prescott.

The Big Boy locomotive, with its coal car, is 132 feet long and weighs 1.2 million tons.

Plans have been finalized for the Southwest Arkansas stops on Tuesday and Wednesday for the world's largest steam locomotive, Union Pacific's Big Boy No. 4014.

The best viewing opportunity may be the locomotive’s overnight stay in Prescott.

CLICK HERE for complete schedule details, which are subject to change.

The locomotive is celebrating the 150th anniversary of the transcontinental railroad's completion, giving rail fans across the Southwest an opportunity to experience history.

No. 4014 left the Steam Shop in Cheyenne, Wyoming, in September for the "Great Race Across the Southwest," making brief whistle-stops in communities along its route through Arizona, Arkansas, California, Colorado, Kansas, Missouri, Nevada, New Mexico, Oklahoma, Texas, Utah and Wyoming.

With the exception of the North Little Rock stop, the Arkansas stops are for viewing only. In some cases, the Big Boy will be displayed behind a fence or other perimeter. It will not be available for tours or passenger excursions.

The North Little Rock stop is a “display day” which includes free access to the “Experience the Union Pacific Rail Car.” Special-edition Big Boy and Golden Spike souvenirs also are available for sale from the merchandise tent.

According to Union Pacific, 25 Big Boys were built exclusively for the railroad, the first of which was delivered in 1941. The locomotives were 132 feet long and weighed 1.2 million pounds.

Because of their great length, the frames of the Big Boys were "hinged," or articulated, to allow them to negotiate curves. They had a 4-8-8-4 wheel arrangement, which meant they had four wheels on the leading set of "pilot" wheels which guided the engine, eight drivers, another set of eight drivers, and four wheels following which supported the rear of the locomotive. The massive engines normally operated between Ogden, Utah, and Cheyenne, Wyoming.

There are seven Big Boys on public display in various cities around the country. They can be found in St. Louis, Missouri; Dallas, Texas; Omaha, Nebraska; Denver, Colorado; Scranton, Pennsylvania; Green Bay, Wisconsin; and Cheyenne, Wyoming.

Big Boy No. 4014 was delivered to Union Pacific in December 1941. The locomotive was retired in December 1961, having traveled 1,031,205 miles in its 20 years in service. Union Pacific reacquired No. 4014 from the RailGiants Museum in Pomona, California, in 2013, and relocated it back to Cheyenne to begin a multi-year restoration process. It returned to service in May 2019 to celebrate the 150th Anniversary of the completion of the Transcontinental Railroad.

Poll: Most readers not ready for return to restaurants

Crossett trucker dies in collision with tree near Shongaloo

Powerball rolls over to $125 million