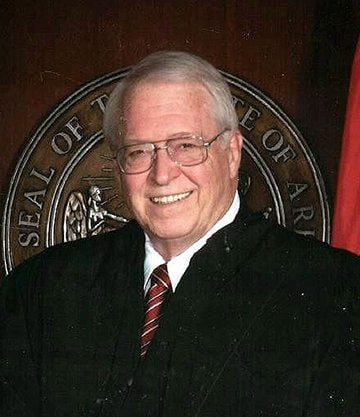 Pushkar Rao is being recognized by the SAU Alumni Association with its Distinguished Young Alumni Award.

Pushkar Rao is being recognized by the SAU Alumni Association with its Distinguished Young Alumni Award.

Mike Kinard of Magnolia, will be receiving the Lifetime Achievement Award. A Waldo native, he received undergraduate and graduate degrees from Southern State College and the University of Arkansas. He was deputy prosecuting attorney for Columbia County, 1966-1973, and prosecuting attorney for the 13th Judicial District from 1977-1980. He was elected to a term in the Arkansas State Senate from 1987-1990 and served as a special justice on the Arkansas Supreme Court in 1992. On Dec. 31, 2016, Kinard completed a two-year term as a judge on the Arkansas Court of Appeals.

He is a founding partner of the Magnolia law firm of Kinard, Crane, Butler & Phillips.

Clyde Baxter, of League City, Texas, and Dr. Rodney L. Griffin, of Magnolia will be the recipients of the Distinguished Alumnus Award.

Baxter works in chemical research, using his 40-plus years of institutional experience in research and development to further technology and mentor young chemists and engineers. He is the lead inventor on 22 patents and more than 100 corresponding foreign patents. He is responsible for development of technology which is the basis for production of more than 500,000 pounds per year of high-value polymer products on the Texas Gulf Coast.

A former technical director for Soltex, Inc., in Houston, Texas, and senior vice-president for technology for Envirofuels LP, in Houston, Baxter accepted the 2015 Presidential Green Chemistry Award at The National Academy of Science in Washington, D.C.

He received his BS degree in chemistry from Southern Arkansas University, graduating with a 3.4 GPA in three and one-half years. He was selected as an Outstanding Student Athlete in his freshman year but gave up track in his junior and senior years to pursue chemistry studies.

Dr. Rodney Griffin, a family physician, attended Southern State College from 1962-1965 and received a BS in pharmacy from the University of Arkansas Pharmacy School and his MD from the University of Arkansas School of Medicine. Griffin served as campus physician at SAU and now serves on the Arkansas Medical Board. He has also served as chief of staff for Magnolia Hospital, and on boards for the Chamber of Commerce, the American Cancer Society, and Abilities Unlimited.

He is a deacon at Central Baptist Church and is recipient of the Paul Harris Fellow Award in Magnolia Rotary. He served as a fellow diplomat in the American Academy of Family Physicians. He has created stained glass windows for churches and homes in Arkansas and Texas.

Rowe earned his BS in 1954 from Southern State College. He was director of Red River Vo-Tech and is past-president of the Vo-Tech Directors Association. He was training director of vocational education for El Dorado COOP and assistant director of Pines Vo-Tech. He served in the U.S. Navy.

Rowe served on the Southern State Alumni Board; SAU Foundation Board; has been active in the Civitan Club in El Dorado, Pine Bluff and Hope; Boy Scouts; Columbia County Community Foundation and is an active member of the First Baptist Church of Hope. He was the Outstanding Young Man of the Year for El Dorado Jaycees; past-president of the Hope-Hempstead County Chamber of Commerce and Hempstead County Industrial & Economic Foundation, and has participated in mission trips with various churches to Guatemala, Honduras, Brazil and Peru.

Lt. Col. Carl Callaway Keese will posthumously receive the award. He attended Southern State College on a football scholarship. After completing his four-year degree in education to become a high school coach and history teacher, he volunteered for the U.S. Army under the mandatory one-year draft. Following his year of service, he re-enrolled at Southern State and began classes in September, but after one week, he withdrew and re-enlisted in the Army, applying for Officer Candidate School.

Keese became a jump master and taught parachuting. He was accepted into OCS and graduated as the outstanding cadet of the year. His first assignment was to West Point, where he taught for three years, and Korea was his first overseas assignment. He was ordered to recruit and coach an Army football team that would beat Navy. After consulting with local coaches Marvin Lindsey, Elmer Smith and Auburn Smith, his team beat Navy in the scheduled game. He completed his master’s degree in Kansas while the commanding officer at Fort Leavenworth.

Following retirement from the military, he worked with the Shriners as a Master Mason. An excellent marksman, he competed in national shooting competitions. He was active in veteran’s research programs at the VA Hospital in Waco, Texas, participating in programs for post-traumatic stress and effects of Agent Orange. He died of cancer traced to Agent Orange and was buried in a small cemetery near Comanche, Texas. His children had arranged to have him buried at Arlington National Cemetery but honored his wish to be buried in an area he loved.

Pushkar Rao, of Calgary, Alberta, Canada, will receive the Distinguished Young Alumni Award. Rao is a management consultant for Suncor Energy, Inc. He is advisor on strategic planning and development; led and executed projects for Sunjet aviation group; led an initiative to cut costs and streamline operations and led a team to streamline charter operations. He served as vice-president of business development and corporate development for TG Engineering, Inc., and was co-founder of True Site View, Inc., a geospatial technology company in the oil and gas industry.

Rao serves on the board of directors of the Canadian Heavy Oil Association. He received his BS in math and Computer Science from SAU in 2000.

MAD on Ice returns to El Dorado amphitheater on November 20

Magnolia's "All Hallows Art Gala" boils over on October 29