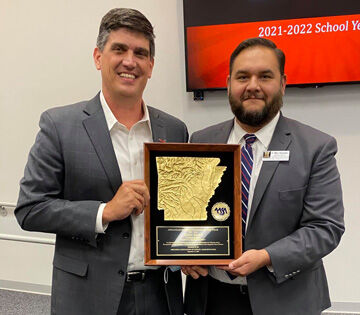 Dr. Mike Hernandez, executive director of the Arkansas Association of Educational Administrators, along with former superintendents of the year, presented Ward with the award during their surprise appearance at Monday night’s meeting of the Magnolia School Board.

“You know that you have a wonderful asset here in this community,” Hernandez said. “Above and beyond, Mr. Ward exemplified what we want representing our state as one of our top superintendents in Arkansas. It’s our hope that he will go on to the national level this coming spring.”

Hernandez also said, “Ward has been recognized as a servant leader by this community involvement and participation in many organizations. He sits on many local and state-wide boards intending to provide more experiences for his students. As a veteran educator he had dedicated his life’s work to students, serving as an elementary science and reading teacher, a bus driver, a principal and for the past 15 years, a superintendent.”

According to a press release issued by the AAEA, “John Ward’s educational philosophy has always been rooted in the idea that education is about more than what happens inside the four walls of a classroom. In each role Mr. Ward has held, he’s made providing experiences for students one of his main priorities. Mr. Ward believes that education is about more than preparing students for a test, educators must prepare students for life.”

Candidates for this honor are judged on leadership for learning, communications, professionalism, and community involvement.

Ward came to Magnolia form his position as superintendent of the Horatio School District.

He is a graduate of Texas A&M-Texarkana with a master’s degree from Henderson State University, post-graduate certification in educational leadership from Southern Arkansas University.

Hard was superintendent when Horatio district voters approved a 12-mill property tax increase to construct a new high school for students in grades seven through 12.

Ward and his wife, Misty, have three sons and a daughter.

Muleriders put 2-0 record on the line against Harding

Family Day at SAU starts at 11 a.m., relief for Hurricane Ida victims will be part of festivities

Oil and Gas: Permits issued in Columbia and Union counties

"Pecan John" Turner will be part of America Pecan Promotion Board

Medicare will be topic for caregivers' meeting

Neither sticks nor carrots changing many minds about COVID-19 vaccines