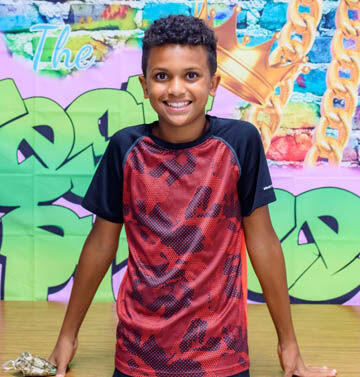 Xavier Hall, a 6th grader at Washington Middle School in El Dorado, said that the "house system" has made middle school a little bit easier. 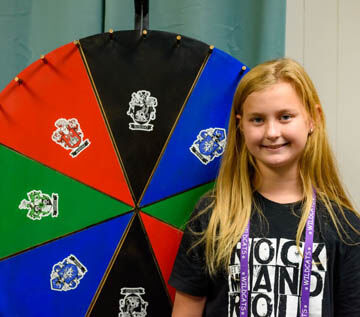 Savannah Felton, a 5th grader, was thrilled to be placed in Altruismo House at Washington Middle School in El Dorado.

Xavier Hall, a 6th grader at Washington Middle School in El Dorado, said that the "house system" has made middle school a little bit easier.

Savannah Felton, a 5th grader, was thrilled to be placed in Altruismo House at Washington Middle School in El Dorado.

The wheel at El Dorado’s Washington Middle School started spinning in early September as new students were eager to learn what house they would be joining for the next two years.

Would they join the reigning house who won last year's trophy, Reveur? Or would they team up with Amistad, Altruismo, or Isibindi? Only the wheel could tell.

Mirrored after the positive culture-building system at The Ron Clark Academy in Atlanta, the house system was implemented during the 2020-2021 school year by new Washington principal Bethanie Hale. She first learned of the RCA House System when she visited the RCA Academy her first year as principal at Retta Brown and fell in love with the concept. When she moved to WMS, she knew this was the perfect opportunity to put the houses into place.

“Middle school is a transition, and it’s really difficult. I think for kids coming from different elementaries. They might know each other, they might not. I wanted to give students a chance to get to know people outside of their circle. I felt like this was a great way to connect kids with each other, to connect staff with kids, and make sure everyone felt like they belonged. Middle school in general is hard to know where they fit in. Houses give everybody a sense of belonging, everybody has a family they belong to. We know that some kids don’t feel like they are a part of things, and we want them to feel a part of our school community.”

Xavier Hall, 6th grader in Team Amistad, said that the house system made middle school a little bit easier. “People participated more with the houses. My favorite part was spinning the wheel.” He hopes that his house will get more points this year so the scoreboard will be more equal, but he did note that “it’s exciting to keep up with the points of the houses to know who’s leading.”

Within their houses, students earn points through various activities such as wearing their house colors on Thursdays, being kind to others, being respectful, putting forth good effort, working hard, meeting their AR goal, and academic excellence. At the end of the year, the house with the most points is the winner. Last year, Reveur was the winning house.

Although it’s a competition, the house system is about building a positive climate for the entire school, including faculty and staff. So while students spin the wheel, faculty and staff have the opportunity to select which house they feel fits them best. Bethany Hale leads the black house; Megan Saunders leads the blue house; Cori Martinez leads the green house; and Michael Brooks leads the red house. Each house has a different meaning:

Altruismo (black): the House of Givers

Amistad (red): the House of Friendship

Isibindi (green): the House of Courage

Reveur (blue): the House of Dreamers

Savannah Felton, an incoming 5th grader, was thrilled to be placed in Altruismo. “All of the definitions of the black house fit my personality.” She plans to wear her house colors every Thursday, keep her grades up, and be kind to others to help her house earn points.

This year, parents and guardians can also keep up with what house is in the lead and how many points their student has by downloading the Ron Clark Academy House Points app.

Hale has big ideas for the future and looks forward to continuing to build on the program. Instead of spinning the wheel in individual classes, she hopes to be able to host a school-wide assembly, similar to a pep rally, where 6th grade students sit with their houses and 5th grade students would spin for their houses. There is also the consideration of spirit wear for the houses, so that students can sport their house colors.

CLICK HERE for more information on the house system.

Murphy USA will repurchase up to $1 billion in shares

Are you looking forward to Christmas?